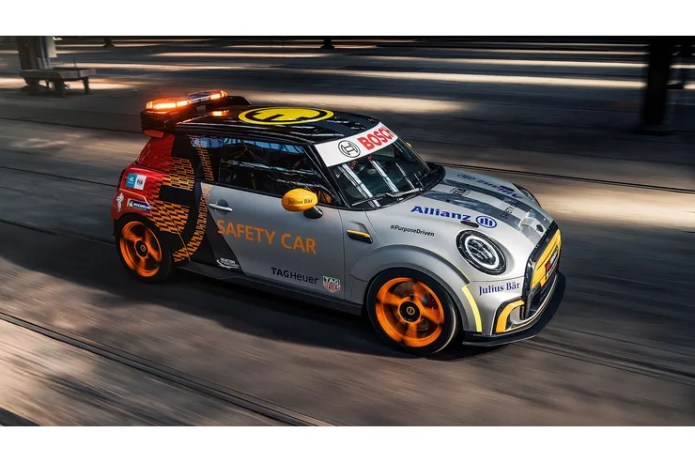 Formula E relies on pure electric drive. What could be more obvious than driving the racing series’ safety car electrically. Mini has built the new brake on the basis of the Cooper SE.

If something gets out of hand in Formula E on the slopes, then the safety car has to run and catch the wild pack. In the coming season, this task will fall to the new Mini Electric Pacesetter. The safety car developed by Mini together with BMW Motorsport, the FIA ​​and Formula E is intended to link the brand’s electrified future with the racing history of John Cooper Works. At the same time, the pacesetter gives clear indications of how electrified mini sports models could appear.

Extensive modifications make the Mini Cooper SE fit for its job as leader of the electric pack. Whoever wants to be in charge of the race track needs big cheeks. The Mini Pacesetter shows this on all four wheel arches with new extensions. The sill areas in between clad carbon add-on parts. The technicians fit 18-inch lightweight forged rims with 245/40 Michelin Pilot sports tires and ten-millimeter wheel spacers into the wheel arches to almost fill the entire format. They hang on a fully adjustable motorsport coilover kit. The rear apron shows the following Formula E community a powerful diffuser and a double-deck rear spoiler, which also houses the signal light system.

The 18-inch rims have the same tires as the Formula E racing cars.

The front of the pacesetter appears almost completely closed. Only the apron lets air through to the reinforced brakes and catches the wind in a spoiler, which is supposed to increase downforce. All add-on parts are made from recycled carbon using a 3D printing process.

The color concept implemented with foils merges the color worlds of Mini Electric and John Cooper Works. The main color of the car is a matt silver that extends behind the center of the vehicle. This is followed by a two-stage color gradient from high-speed orange to a crisp red tone. The wheels, the exterior mirror covers and various other body elements are set off in orange. Sponsor stickers complete the dynamic design. Of course, Safety Car lettering should not be missing. 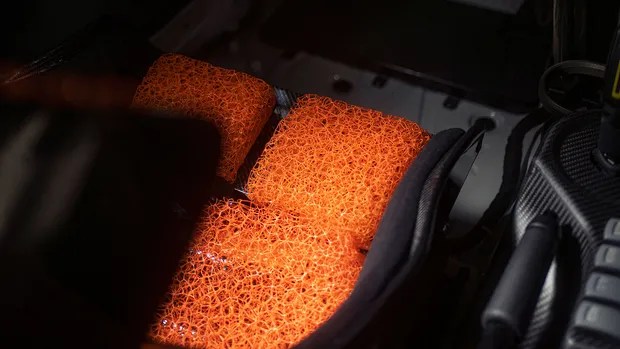 The interior is reduced to the bare essentials. There are only seats in the front; A welded-in roll cage opens up at the rear. The driver is fixed in his racing seat with a six-point belt. The seat cushion consists of a 3D printed structure that is reminiscent of a sponge. A digital cockpit provides information. The steering wheel impact absorber and central instrument have to give way to carbon covers.

The center console contains the gear selector switch as well as handbrake and controls for the necessary signal lights – all covered in carbon fiber. In the slimmed-down carbon door panel with window regulator and door opener, a fabric loop makes it easier to close the door.

Because Pacesetter is not just a title, but also a task, the technology has also been sharpened. Consistent lightweight construction reduces the weight by around 130 to just 1,230 kilograms. The optimized electric drive based on the Mini Cooper SE delivers 135 kW and 280 Nm. The Mini Electric Pacesetter sprints from 0 to 100 km / h in 6.7 seconds (series: 7.3 s), and the pacesetter can pull through from 80 to 120 km / h in 4.3 seconds (series: 4.6 s). Mini does not reveal how long the safety car may last before the battery is empty. 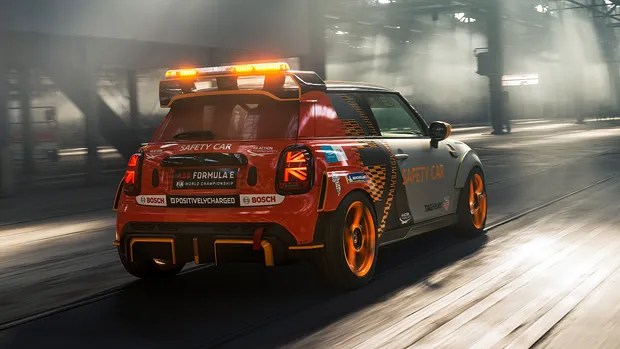 With 135 kW of power, the Pacesetter is supposed to collect the Formula E pack.

It is clear, however, that the Mini Electric Pacesetter will be used for the first time on April 10, 2021 in Rome as part of the second event of the current Formula E season 2021. Bruno Correia, the official FIA Safety Car driver for Formula E, will then be at the wheel.

Yes. After the first dominoes, the next ones will soon fall.

No. Other manufacturers will replace the dropouts.

With the Pacesetter, Mini brings the new safety car for Formula E. If you look closely, you can see the next Mini JCW with a purely electric drive.

Mega lockdown in Germany: this is how it should continue with...

Brexit talks – Great Britain threatens the EU with a hard...

Supermarkets are distributing FFP2 masks to customers free of charge

“We have the mutants on our necks”