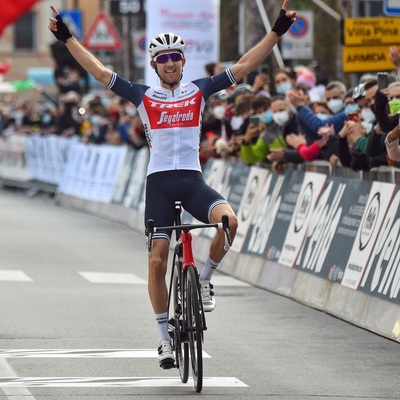 03.03.2021  | (rsn) – In the entire past year, Trek – Segafredo had just ten wins. After the first few weeks of the 2021 season, the team already has five on their account. After former world champion Mads Pedersen won Kuurne-Brussels-Kuurne on Sunday, Bauke Mollema followed suit at the 58th Trofeo Laigueglia just 72 hours later.

At the start of the Italian road season, the Dutchman won his second win of the season with a solo ride of 16 kilometers over 202 kilometers around Laiguelia against extremely strong competition. In the sprint of the pursuers, Egan Bernal (Ineos Grenadiers) only came second, 39 seconds behind, ahead of Mauri Vansevenant (Deceuninck – Quick-Step) and Clement Champoussin (AG2R Citroen). The strong performance of Trek – Segafredo was rounded off by Giulio Ciccone. The previous year’s winner came in fifth this time.

“It’s nice to win here, I’ve felt very good the last few weeks, I really wanted to start the season successfully,” said Mollema Mollema in the RAI winner’s interview. “It’s a great thing that I’ve already won two races The course suited me today and we started with a strong team. The goal was then to win here. ”

Together with the similarly strong Ineos Grenadiers, Trek – Segafredo controlled the race, which was initially dominated by twelve outliers, including the young German Juri Hollmann (Movistar). After the top group had fallen apart before the start of the four-time 11 km circuit, the Spaniard Mikel Landa (Bahrain Victorious) attacked as the first of the favorites.

After several more attacks from the shrinking field, Mollema finally competed shortly before the penultimate crossing of Capo Mele, followed by his team-mate Ciccone, Champoussin, Landa, Vansevenant, Bernal and two other drivers. The 34-year-old quickly gained a small lead over the competition and used the downhill position on the top tube, the so-called super tuck position, which was prohibited from April 1st. Mollema started the final lap with a half-minute lead and maintained this lead over the last few kilometers.

“We already have five victories, hopefully we will continue to be successful”, said the trek captain, who will be back in action at the weekend when the hunt over the Strade Bianche is due in Tuscany. With the GP Industria there is another Italian one-day race. “Then I’ll take something out and then prepare for the Ardennes classics,” announced Mollema.

Auto – Bentley will switch to freight machines in the event...

VDMA: Companies want to close longer at the turn of the...

Haller before moving to Ajax