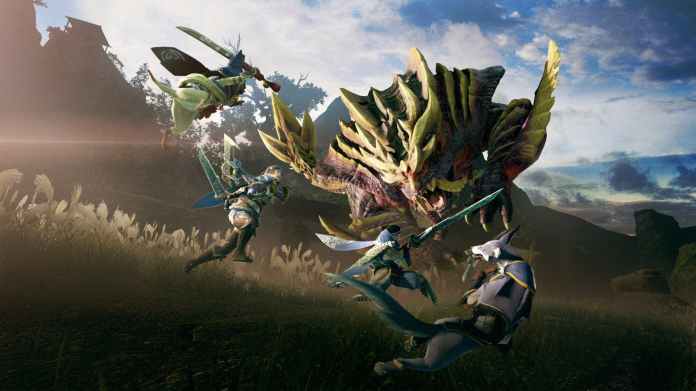 Since “Monster Hunter World”, the hit action role-playing game has also enjoyed great popularity outside of Japan. But is the sequel with “Monster Hunter Rise” really another step forward?

The killing of a monster by the hero has been part of every good epic since time immemorial, and at least since “The Neverending Story”, many a child (or adult) dreams of going on an adventure on the back of a friendly dragon.

The latter is one of the big new features in the latest part of the “Monster Hunter” series, because the monsters can now not only be fought, but also ridden and used as a living weapon in the fight against other monsters. But one after the other.

What would a good monster legend be without a valiant hero or heroine? Since the first “Monster Hunter” titles, it has been the player’s job to hunt down and kill the monsters. You win monster-specific materials such as scales, hides, bones, horns or the like. From these you forge new armor and weapons in order to hunt even more powerful monsters.

Good equipment is also necessary, because the Japanese-inspired village of Kamura is not only threatened by a single monster, but has to arm itself against the onslaught of a whole horde of wild beasts. It is important to get to the bottom of the cause of this imminent onslaught and to face the sometimes huge monsters in battle.

Fortunately, hunters never go out alone in Monster Hunter Rise. As in the previous titles in the series, the player is again accompanied by a cute, cat-like Palico, who, as a personal field medic, supports the player with healing and other aids. With the Palamute, a dog joins the team and supports the hunter effectively in the fight. But it’s particularly cool that the bowels can be ridden and that you can move particularly nimbly through the open areas.

But smaller animals also prove to be useful (and involuntary) allies. The biggest innovation are the rope beetles, which serve as weapons, means of transport and hems. On the one hand, you can swing through the levels like Tarzan on them or pull yourself to distant places as a kind of grappling hook. The most important new feature, however, is that thanks to them you can briefly saddle up and control dazed monsters.

Whoever meets the opposing monster enough times in a fight usually gets the chance to mount it at the push of a button. So if you have always dreamed of controlling the fiery T-Rex Anjanath or the dragon Rathalos yourself, you will get your money’s worth. Each of the around 60 monsters in the game can be ridden and thus used as a living weapon for a short time.

If you hit an opponent enough often with the monster attacks, a bar is charged, with which you can perform a particularly strong final attack. But even without a second monster, the new riding function is used enough.

Thanks to the newly introduced riding and rope beetle functions, “Monster Hunter Rise” is a lot more agile and faster than its predecessors. Anyone who is knocked over by a monster can, thanks to the rope beetle, land directly on their feet again at the push of a button and is back in the middle of the fight within seconds. For example, in “Monster Hunter World” you often had longer breaks between fights, consisting of slow walking around, sharpening weapons or drinking potions, you can now carry out such activities on the back of the Palamute and get back into the fights faster. All of this makes the hunt appear more entertaining and action-packed without changing the basic gameplay too much.

What on the ears …

When it comes to weapons, “Monster Hunter Rise” is a bit more cautious and does not present a new genre, nor does it turn the combat system upside down. If you still have the combos from “Monster Hunter World” in your blood, you can get them straight away in “Rise”.

Only the hunting horn is being revised. So far, and especially in “Monster Hunter World”, it has only really been used sensibly in a hunting group with fellow players, but now the musical instrument is also a very powerful weapon in solo play. And let’s be honest, is there anything cooler than pulling an oversized guitar over the head of a giant frog-crocodile monster?

… and something for the eyes

Graphically, “Monster Hunter Rise” gets everything out of the Nintendo Switch. You can’t quite keep up with a “Monster Hunter World”, but the surroundings and especially the monsters look very appealing. Capcom delivers one of the best-looking action role-playing games for the Switch here. Although you have to accept some compromises in resolution and frame rate in handheld mode, it is more than enough to briefly kill a few monsters on the balcony or in the waiting room for the vaccination.

Drew Brees of the Saints ends his career after going bankrupt...

Tsunami warning for the entire Pacific after New Zealand quake

Cyberpunk 2077 more emotional than you thought?

The situation of homeless people in Germany has worsened due to...