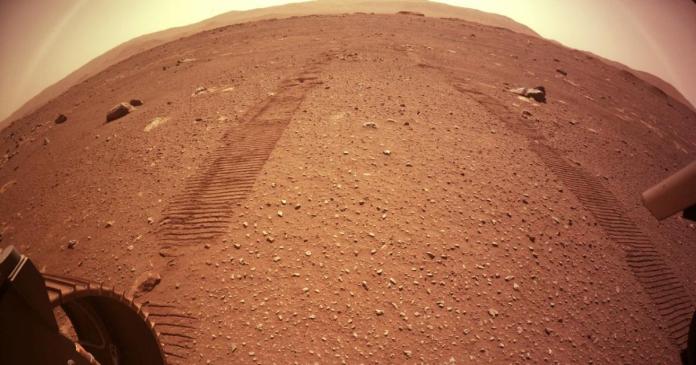 New findings turn the theory on its head that water disappeared into space.
A revolutionary finding could overturn the popular theory that Mars lost its enormous amounts of water to space via the atmosphere. As researchers found using the latest NASA data, this theory does not provide a conclusive explanation of how Mars could have lost its vast amounts of water. Rather, the scientists now believe that between 30 and 99 percent of the water masses are still present on Mars – more precisely in the crust.

Chemical composition as an indication

Most of the water that could once have covered all of Mars to a depth of 100 to 1500 meters is likely to be bound in minerals and clay and consequently trapped under the dust-dry Martian soil. This knowledge is based on a chemical analysis of the current Martian atmosphere and the Martian surface. The atmosphere would have to have a much higher proportion of deuterium if the water had been lost almost exclusively through the atmosphere.

Deuterium is a form of hydrogen that is also known as “heavy hydrogen” because of its mass. Unlike the lighter hydrogen, of which water is largely made, deuterium cannot easily escape into the upper atmosphere and from there into space due to its mass. A large proportion of deuterium would therefore remain in the atmosphere of Mars and would therefore also have to be measured. Since this is not the case, the researchers are pursuing their exciting new theory.

Earth as a model

It is not far-fetched that water can be stored and trapped in minerals and other substances such as clay through the interaction with rock and the chemical processes that take place. This process is also well documented on earth, but due to the tectonic plate shifts and volcanism, these water-containing minerals are melted again and the water is partially released again.

However, since Mars has no tectonic plates, the “drying out” through this process is permanent compared to the earth. Given the enormous amounts of water that were calculated for Mars at an earlier stage, the researchers assume that both factors played a role. So, the binding of the water in the crust as well as the loss of the water to space.

The exciting theory could provide new insights into geology and climate change on Mars. Soil samples and atmospheric measurements by the Mars rover Perseverence should bring new clues. The previous research results were published in the journal Science.

Coronavirus in the Recklinghausen district: the number of current cases and...

“The Masked Singer” winner Baschi had to go to hospital

Covid-19: Another 198 corona cases in MV and seven dead