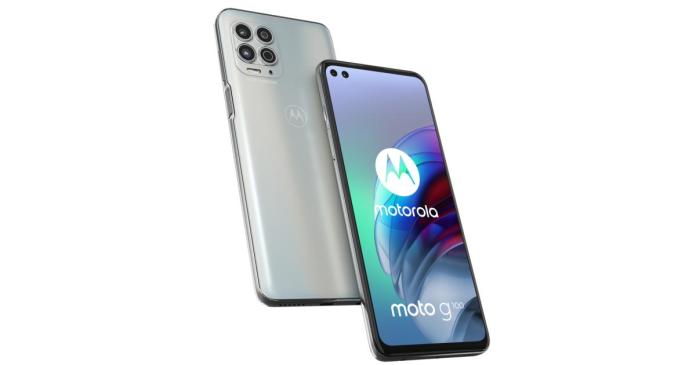 Motorola’s Moto G series has been around for ten years. For the anniversary there is a special model with strong hardware and a new platform called Ready for. It connects smartphones and large screens.

Motorola turns the smartphone into a play and work device. The new Moto G100 can be connected to computer monitors or televisions using a USB-C cable and thus operated as a computer replacement or game console. Motorola calls this newly introduced platform Ready for.
In addition, the 6.7-inch Android Qualcomms Snapdragon 870, 8 gigabytes (GB) of RAM, 128 GB of UFS 3.1 storage, WLAN6 and 5G cellular networks. The camera with 64-megapixel main sensor, 16-MP wide-angle with macro mode also has a ring light for better illumination when taking close-ups. Two cameras are installed on the front for video conferences. You automatically select a good image section with a centered face, and microphones filter out ambient noise.
Connected to a screen, the Moto G100 becomes a desktop replacement. Similar to Samsung’s Dex system, web-based programs such as Google Docs or presentations or corresponding Android apps can be used. A supplied USB-C dock establishes the connection and, in desktop mode, blows cooling air to the back of the phone. Android games and films can be watched in large format on connected televisions.
The Moto G100 is available in stores for around 500 euros, with a dock and connection cable for larger screens in the package.

On Wednesday, the president resigns – Trump wants to pardon around...

Historians: Catholic Church on the way to becoming a sect |...

Clan shooting in Kreuzberg – apparently because of gambling debts

Onset of winter in Germany: shipping on the Mittelland and Elbe...

Angelhaus Koss in Berlin: Where to pull fishing bait from the...