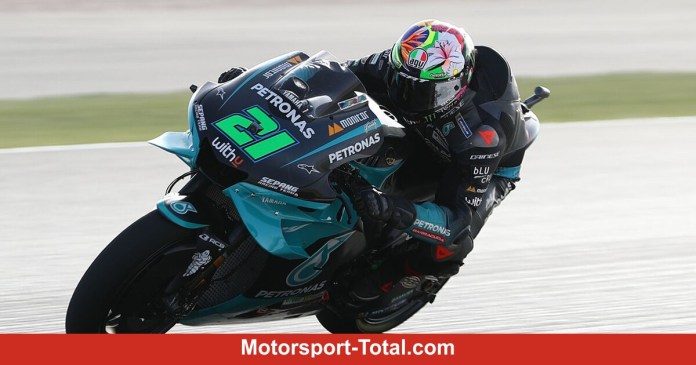 (Motorsport-Total.com) – Franco Morbidelli (Petronas-Yamaha) finished the third free practice of MotoGP in Qatar as the fastest. With a time of 1: 54.676 minutes he prevailed against Aleix Espargaro (Aprilia) and Luca Marini (Avintia-Ducati). That didn’t change anything about the overall standings, as the session was slower than yesterday.

While training for Ducati rider Jack Miller started with a fall at Turn 15, the Yamaha riders set the early pace for this session. Both Morbidelli and the two works drivers Maverick Vinales and Fabio Quartararo relied on fresh, hard tires and thus pushed themselves to the top.

The times were in the low to medium 1:55 range, which was of course slower than yesterday. But that was mainly due to the hot conditions. With 36 degrees air and almost 50 degrees asphalt temperature, it was significantly warmer than on Friday.

After a short compulsory break, Miller also got back into the action on his second bike. This time, unlike the fall in the first attempt (soft-medium), he had mounted two fresh hard tires like the Yamahas. However, he did not come close to the pace of Morbidelli and Co. and initially ranked tenth.

In the end, Miller even fell back to 15th place, also because he spent the rest of the training session in the pits. With Morbidelli, Aleix Espargaro, Marini and Alex Rins (Suzuki), four drivers climbed to 1:54 times in the final phase and thus claimed the top positions in this training session.

This is representative with a view to the race on Sunday, when it will be noticeably cooler and the softer tire compounds will be used, but not. The fourth free practice session should give a little more information about this.

MotoGP champion I have to compete in Q1

With regard to qualifying and the direct jump into Q2, the third free practice session was a used session for all those who were outside the top 10 after Friday. There were no increases compared to yesterday, so that Friday’s overall result remains decisive for the direct move-in in Q2.

They all move directly into Q2 – unlike MotoGP champion Joan Mir (Suzuki), who has to take the detour via Q1 in eleventh place. The LCR-Honda duo Alex Marquez and Takaaki Nakagami, their brand colleague Stefan Bradl and all KTM drivers will fight with him for the last two Q2 places.

The following are directly qualified for Q2:

How to delete WhatsApp – the right way – multimedia

“Assassin’s Creed Valhalla” in the test: Vikings at speed

Eminem apologizes to Rihanna in a new song