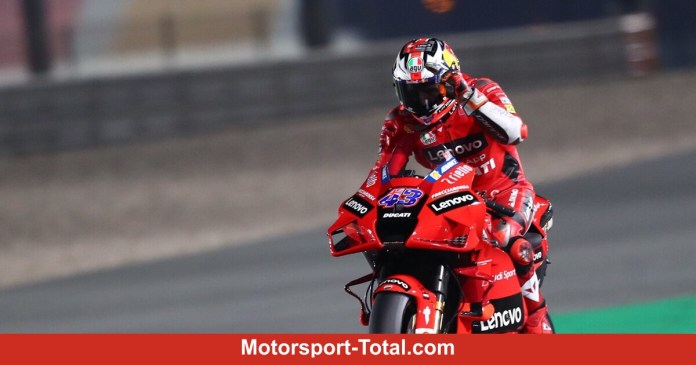 With that we say goodbye to the ticker today. Tomorrow the qualifying sessions are on the program. It remains to be seen whether the conditions allow faster times in the third training session. The Q2 places may already be taken. We will find out and follow it for you as usual in the ticker. See you!

The schedule for Saturday (in CET):

Honda substitute driver Stefan Bradl also couldn’t really put himself in the limelight on Friday. He ranks 18th behind Luca Marini and ahead of the Tech 3 KTM duo. Lorenzo Savadori from Aprilia remains at the bottom.

The gaps in the top 10 are extremely tight. A good half a second covers the ten fastest drivers. The second half of the top 10 is led by Vinales and Morbidelli. Aleix Espargaro finished the day in eighth ahead of Rossi and Pol Espargaro. World Champion Mir missed the jump into the top 10 in eleventh place.

Bagnaia breaks off his last lap and nobody else can jeopardize Miller’s best time. With 1: 53.387 minutes, the Ducati driver remains in front. Team-mate Bagnaia is in second place, Quartararo is third. He pushed Zarco to fourth place. Rins completes the top 5 with the Suzuki.

Second crash for Pol Espargaro this Friday, this time in the corner! This means that the training for the Honda driver ends a few seconds before the time runs out. His fall causes yellow flags, which is why some will not be able to improve on their last flying lap.

With just a few minutes left on the watch, we have a Ducati triple tip. Miller pushes past Bagnaia, Zarco takes third place. But the competition is also fast. Everyone now wants to add one more time.

MotoGP FT2: a Ducati in front

Now Bagnaia has taken the lead. His lead over Quartararo is 0.275 seconds. Team-mate Miller, currently tenth, also put on fresh soft tires for his last attack. What else is there for the fastest driver?

MotoGP FT2: The pace continues to pick up

The ranking is now really good again, barely a quarter of an hour before the end of the session. Quartararo is the new front runner with a time of 1: 53.697 minutes. His Yamaha team-mate Vinales has also improved and is now third. Rins and Bagnaia round off the top 5.

Aleix Espargaro’s fastest time would have meant fourth place on the grid in 2019. Aprilia has made a significant step forward. The tests already indicated potential, but now we can see that the RS-GP has become really competitive.

Take a look at our video with KTM technical director Sebastian Risse. He also explains why the Losail circuit doesn’t fit the KTM so well.

What KTM expects from the MotoGP season 2021

Interview with technical director Sebastian Risse: KTM has great expectations after the 2020 victories, but they followed suit in the preseason test in Qatar More motorcycle videos

Alex Rins sets the second fastest lap, but Aleix Espargaro is barely half a second away. Joan Mir is in seventh place. The Suzuki duo will definitely be expected again in the race.

So far, Marquez replacement Stefan Bradl has not shown any top times. He is almost two seconds behind, so the German is only 18th. The best Honda representative is currently Pol Espargaro in tenth place.

The Aprilia driver is stopped with 1: 53.789 minutes. This makes Aleix Espargaro 0.6 seconds faster than the Ducati duo Bagnaia and Miller! Aprilia plays a role in awarding the top spots.

Maverick Vinales practices a start at the end of the pit lane every time he goes out onto the track. This has now become a routine ritual for the Yamaha rider.

Singer Kerstin Ott is angry and says war on the tabloids

Mutations spread: how do the vaccinations work?