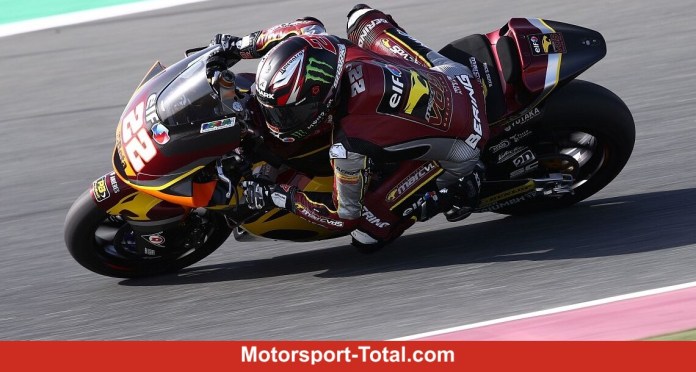 Out of nowhere, Raul Fernandez appears in second place. We know from the Moto3 class that the Spaniard is extremely good in qualifying.

Jake Dixon drives slowly, turns around and sees his teammate Xavi Vierge approaching. Dixon accelerates again to get in front of Vierge. The speed difference is too great. Vierge drives Dixon to the rear tire. Fortunately, nothing happens and both can continue.

Marco Bezzecchi moves into second place and Bo Bendsneyder sets the third fastest lap. In the past few years, Bendsneyder was often far behind because the NTS chassis is not yet competitive. Switching to a Kalex has paid off for Bo so far.

Marcel Schrötter is in 14th place.

In his second lap, Lowes is stopped with 1: 58.798 minutes. This time the time is not canceled and the Brit is in first place.

That was a fantastic lap because Jake Dixon is 0.4 seconds behind in second. Remy Gardner is third.

At first, Lowes puts in 1: 59.447 minutes, but Jake Dixon is only 0.011 seconds slower. But the rankings are constantly changing.

The race management is canceling Lowes’ time due to track limits. And Remy Gardner takes the lead in front of his Ajo teammate Raul Fernandez. The ajo duo helps each other. Gardner follows in the slipstream of Fernandez.

Some teammates work together, for example at VR46 and Petronas Sprinta. The Intact duo Schrötter and Arbolino also tried to help each other during training. The timing didn’t quite work out. Arbolino is now on the route a few meters from Schrötter.

18 drivers are fighting for the pole position and based on the training sessions Sam Lowes and Marco Bezzecchi are hot contenders for the best starting positions.

The German Marcel Schrötter and the Swiss Tom Lüthi also qualified directly for Q2. In 2019 Schrötter started from pole position on the Losail Circuit.

The drivers drive through and do not make a pit stop. In the end, it gets harder to improve times. It’s extremely tight. The top 4 are in a tenth of a second!

Marcos Ramirez gets caught in turn 14. The Spaniard is also in pain and is slow to get to his feet. He is holding his right wrist. Hopefully he didn’t break anything.

Moto2 Q1: Times are getting faster

The drivers improve with every lap. Di Giannantonio is slightly faster than Vietti and Chantra. The trio in the first three places is within a tenth of a second. Ogura is also involved.

Seasoned Simone Corsi has a heavy highsider in turn 16. The Italian kneels on the ground for a few moments. But then he can get up and walk away without help.

While a large group has formed with Augusto Fernandez at the head, di Giannantonio does his flying lap on his own. With 1: 59.952 minutes, the Italian takes the lead in front of Garzo, Dalla Porta and Vietti.

The Moto2 class is already on the track. In Q1, among others, Celestino Vietti, Fabio di Giannantonio and Augusto Fernandez, who we would actually expect further ahead.

The race management is investigating an incident between Darryn Binder and Jaume Masia. On his pole lap, Binder overtook Masia before Turn 15. There was a contact.

Maximilian Kofler can’t improve on his second attempt. Therefore, the Austrian falls back to 16th place. World Cup points could be within reach tomorrow.

Vaccinate with BNT162b2? – THE AXIS OF GOOD. ACHGUT.COM

Hansi Flick (FC Bayern): “I trust Christian to do everything” –...

“We could be Apple today”