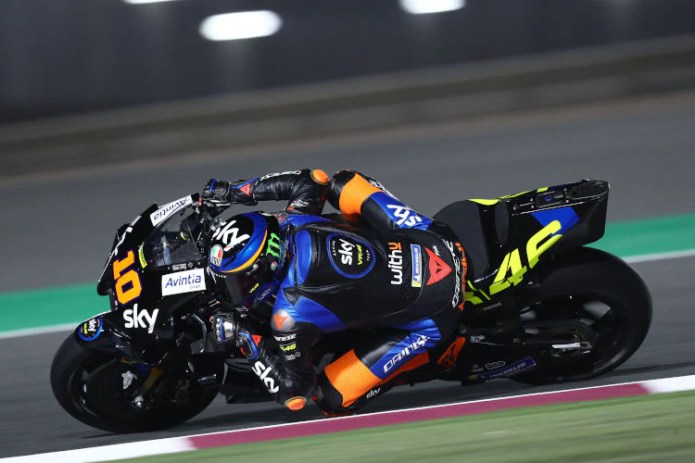 Luca Marini was calm in Qatar after his first day of testing on the MotoGP Ducati, even though he suffered from technical problems at the beginning and two of his mechanics were missing from the Avintia box due to the Corona.

The long wait came to an end for Luca Marini at the shakedown test in Doha: for the first time last year’s Moto2 runner-up sat on his Desmosedici GP19 on Friday – and for the first time a MotoGP bike with Sky VR46 branding took to the racetrack.

The rookie was already busy talking to the guys from the VR46 Riders Academy in winter about the new class: “I talked a lot with Pecco in particular, because he knows the bike very well. But I also spoke to Franco, every tip was good during the long winter break. I was really ready and focused when I got on the bike for the first time, ”said Marini.

The 23-year-old Italian, who exchanged ideas with his Academy buddy and former Moto2 team-mate Pecco Bagnaia (Ducati Lenovo Team), ended his first day of work in the premier class after a total of 33 laps with a personal best of 1: 58.376 minutes He was 2.762 seconds slower than HRC test driver Stefan Bradl.

However, there were technical problems with both Desmosedici in his box. «At first the motorcycle didn’t work. I didn’t have 100 percent power either, so the first time wasn’t a shock because there was a problem. When I got back to the pits, everyone asked me how it was. But the feeling was normal, and I shocked everyone with the reaction, ”Marini said with a smile. “After that we solved the problems, I was able to do a couple of good laps towards the end and feel the full power.”

Is the Ducati demanding? “I imagined it would be much worse. The bike drives well, even if I haven’t pushed it to the limit yet, of course. But the feeling was nice. It was a shame I couldn’t do a lot of laps. Because the first 15 were only ‘in’ and ‘out’ ”, sighed the newcomer to the class. «But I’m happy that we were able to solve it in the end. I also have to thank Ducati because we had a lot of support. Having so many Ducati people in my box was nice to see. Being able to talk to Gigi and feel the support was a great help for me. ”

Is everything okay for Saturday? “At the moment it seems so, but they are still working on the second motorcycle. I don’t know what the problems are, but the guys are very good. I like my team, they worked an incredible amount today, five hours without a break. A motorcycle should definitely be fine, because in the end everything went well, except for a small problem with the ride height adjuster, which worked once and didn’t work once. But we’ve already solved that. ”

In addition to the technical start-up difficulties, Marini also had to do without two mechanics in his box, who had to stay in the hotel due to a positive Covid 19 test result: “You worked with me last year, I brought you with me from Moto2. I know them well because they live near me. I trust them and they have been very much missing today. Because it would have been a special day for her too. Tomorrow they do another test, I hope the result is negative. It’s very strange, they took a lot of precautions, I trust them … I believe it can also be a false positive. We will know in the next few days. “

Despite the initial problems, Marini was able to get a first impression of the MotoGP bike: “The electronics are impressive. You have to have the confidence to turn up the gas a little more decisively. In my opinion, the rookies lack that a bit because there is a lot of performance. We are not used to that, we come from Moto2. And I believe that this is one of the reasons why Martin is supported in a strange place. It is difficult to control the corner exit, you have to get used to it. If you rely on the electronics and give full throttle, the motorcycle is more stable. ”

The Sky VR46 Avintia driver made the biggest difference in the braking phase: “The carbon brake really gives you a special feeling. My way of braking and my style of using the front brake is not the right one. I have to try to adapt to that. But that shouldn’t be a problem. ”

The plan for Saturday is already in place: “We have to work a bit on my position on the bike. I don’t feel so comfortable yet – the handlebars, the seat, the tank, we have to work on these details because I can’t take a natural position on the bike, especially in the middle of the bend. I want to concentrate a little more on that tomorrow, ”announced the 1.84 m tall Italian. «I would like a higher bench because the knee angle is not enough, I don’t have enough space. I want to make the bike a little more mine. It’s nothing big, more of a feeling. For example, it’s about placing each lever the way I want it. I would also like a different seat. I don’t know if it is possible, but I also checked with Ducati. But if it doesn’t work, it’s not a problem either. I can adapt. Because apart from Jorge Lorenzo, who worked a lot on this aspect, all the other drivers got along with what Ducati has brought. “

On the first official IRTA test day, Marini will also be on the track for the first time with his half-brother Valentino Rossi in a MotoGP session. «Yeah, that’s cool, let’s see. That’s why I’m still sleeping tonight, I never have any problems with it, ”he said on Friday evening.

Donald Trump and his fateful weeks 2020: the loser of the...