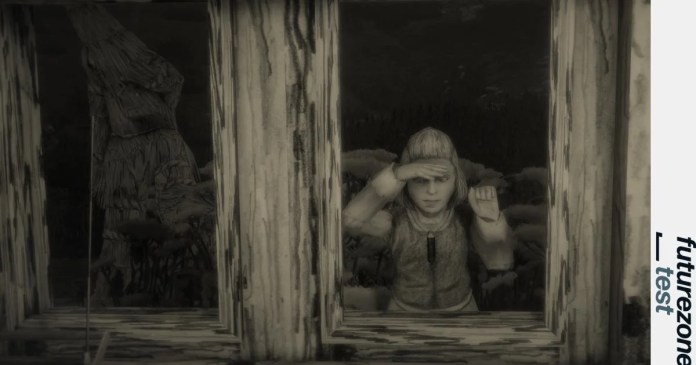 The hand-drawn horror adventure borrows from Swiss folklore and is unparalleled in the process.

Mundaun is a hand-drawn horror adventure that takes players to the Swiss Alps. There are fabulous demons and a dark past lurking there.

Mundaun is a tranquil place in the Swiss high Alps. Serpentines lead up the eponymous mountain Piz Mundaun. The game begins in a bus that winds its way up the street and reveals the impressive mountain landscape. The reason why the main character Curdin visits this place is tragic: his grandfather was killed in a barn fire.

It quickly becomes apparent that a supernatural force has its finger in the game here, which has a firm grip on all the residents who live scattered in the Piz Mundaun valley. A hike begins, up the mountain, which reveals new horrors with each stage.

Mundaun is a spectacular work of art. The developer Michael Ziegler drew every texture himself. He drew inspiration from the real town of Obersaxen Mundaun in the canton of Graubünden, where he spent his holidays as a child. Wood grain, straws, rock walls and goat hair were turned from the pencil sketch into a 3D object. This also means that the entire game is kept in a monochrome design, like leafing through a sketchbook. An old sketchbook, mind you, the pages of which have already yellowed to a sepia tone.

This also gave the artist the freedom to incorporate suggested faces and pairs of eyes everywhere, in rock walls and tree stumps. He thus ensures a constant feeling of observation and enlivens the mountain landscape as if it were another figure in the game, unclear whether it is an opponent or an ally. This also applies to everyone whom Curdin meets on his hike. They use a lot of clichés from the “village horror” pot: a creepy mute girl, a creepy confused painter, a fearful priest, a war-torn commander who has not yet found peace. 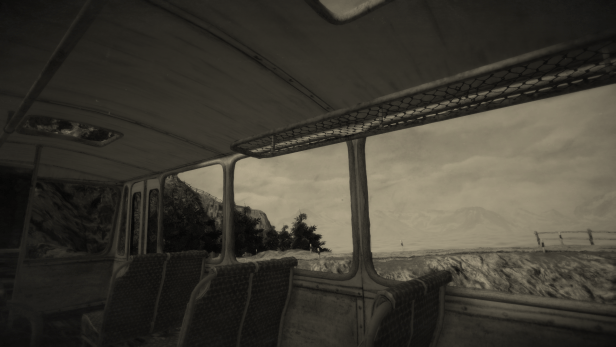 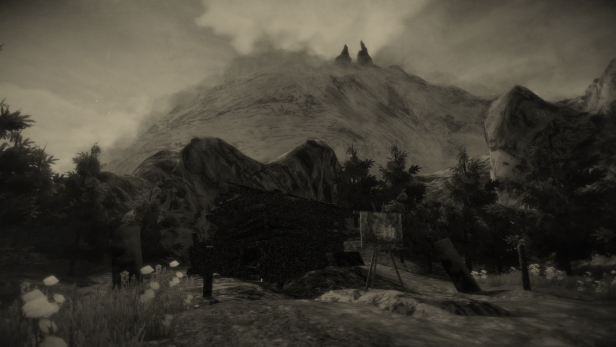 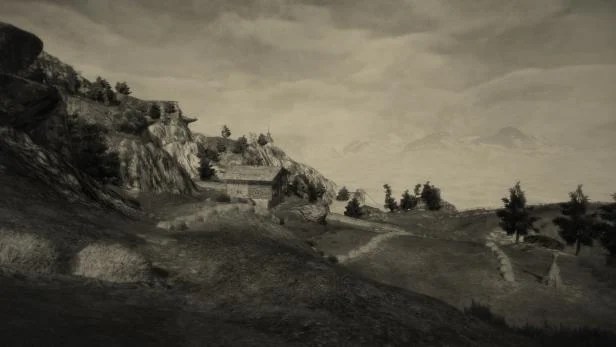 It is not a particularly refreshing story that makes Mundaun so exciting, and puzzle fans are not really challenged either. In terms of play, the first-person adventure is not a revolution. It proceeds quite linearly, in the journal every step is chewed separately. You collect objects and keys (lots of keys) and work your way up step by step to reveal the secret. While there is much to discover, the question of what to do next never arises. Rather, the staging is what makes this game a special experience.

I’m usually not a fan of horror games, on the contrary, I avoid them whenever I can. I hate cheap shock effects, jump scares and the feeling that virtual death could lurk around every corner. The genre actually has many more facets. Stephen King once divided this into three levels: horror, horror and disgust. While the horror leaves a lot of room for your own imagination, the horror shows the uncanny without turning into disgust. This, in turn, exhausts the extremes of good taste. Many games are looking for the extreme, more rarely do we stay between horror and horror. And that’s why it’s especially refreshing that Mundaun is right here. 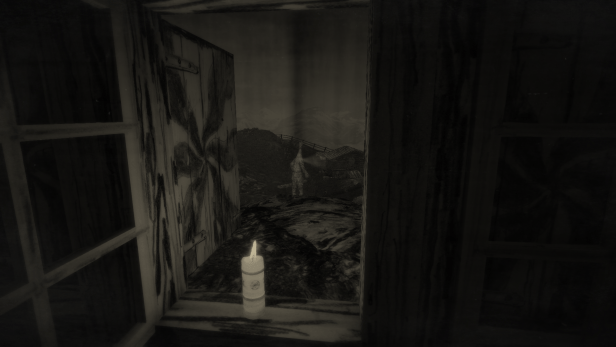 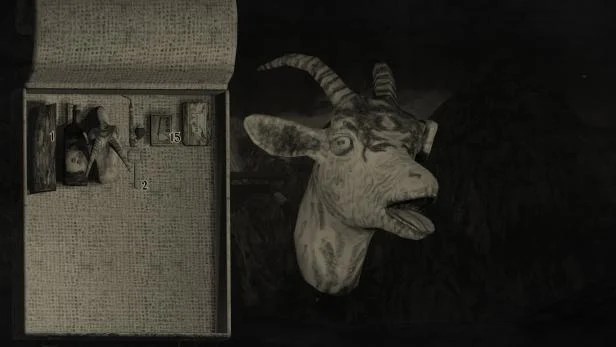 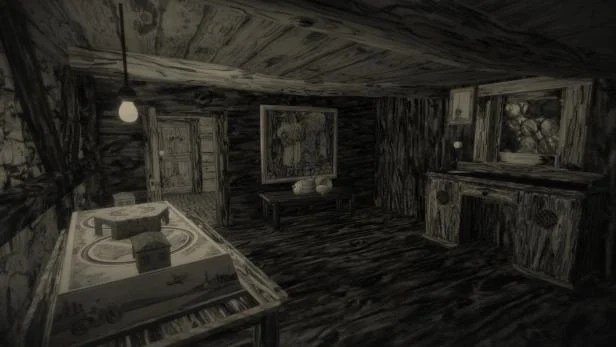 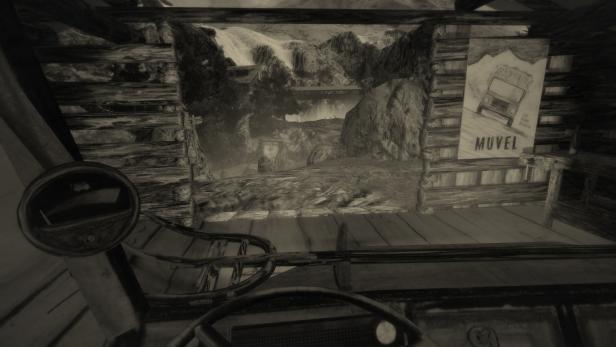 With pitchfork and binoculars

The fantastic world of games borrows from folklore and legends. I am haunted by mythical creatures, severed goat heads talk to me, while I prick straw demons with pitchforks and hide from hovering beekeepers who incite their swarms of bees on me. I watch their paths through binoculars to scurry past them.

The game becomes creepy with successful light-and-shadow games. The contrast between the wide mountain landscapes and the narrow, seemingly endless corridors and dark huts create claustrophobic moments. What is particularly immersive is that the entire game was set to music in Rhaeto-Romanic, with the translation provided by the subtitles. The soundscape is a mixture of threatening rumble of thunder, choir singing and deep strings and condenses the already eerie atmosphere even further. 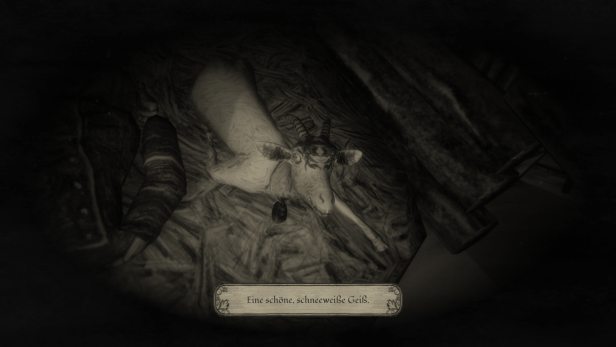 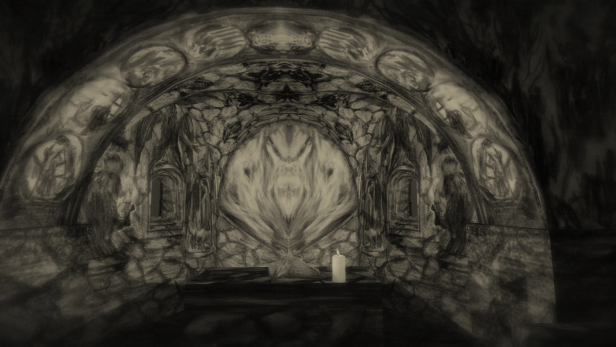 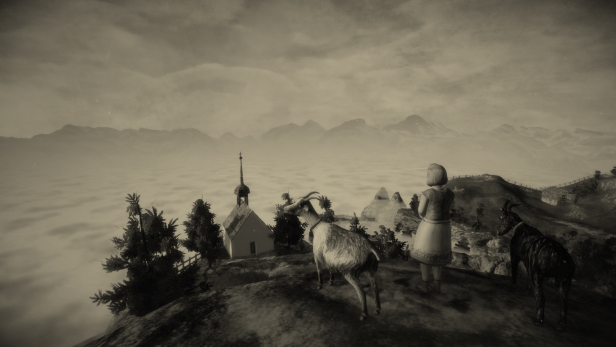 Mundaun is special and whoever gets involved with it will have great pleasure with it. The game can be completed in 7 hours. But it took me much longer, because I always took my time to let the breathtaking scenery work its magic on me. Despite the linear design, Mundaun invites you to explore every corner, open every door and drawer, take a closer look at every picture on the wall. Although there are no flashy moments of shock, one is sufficiently frightened (at least for my taste). The mood becomes more and more tense as the game progresses.

The only game that had a similar effect on me was the similarly great “Return of the Obra Dinn”, also a monochrome horror adventure game that thrives on its dense atmosphere. The enormous and years of work that Michael Ziegler put into single-handedly in Mundaun can be felt at every corner. After the credits, you have the desire to come back and let the pictures work their magic again. I can only recommend “Mundaun” to everyone.

Mundaun has been released for PC (Steam and Epic), PS4 and PS5, Xbox One and Series X / S. A version for the Nintendo Switch is already being worked on.

Migrants tied up? Serious allegations against the Greek coast guard

Tennis professional tested positive in Australia – Djokovic flashes off with...

Rubarb: Scholz nephews want to help save with fintech