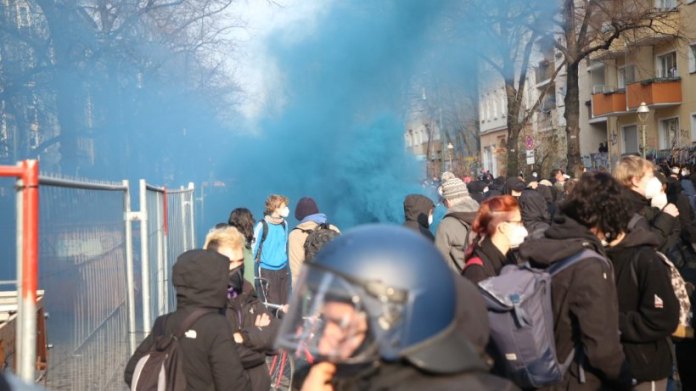 9.07 a.m.: The owner of the premises is on site. He is due to enter the building on Reichenberger Straße shortly together with the police and the press.

9.06 a.m.: Police spokesman Thilo Cablitz confirms that the two women arrested were released after their data had been recorded. Overall, there were “a few arrests” in the course of the protests against the eviction. The police assume that the gatherings will continue until 11/12 a.m. “Purely theoretically” it is possible that the demonstration march will later be allowed to go before the “mutiny”. That has to be negotiated.

8.51 a.m.: According to Katina Schubert, Berlin state chairman of the Left Party, the two temporarily arrested people, two women, have been released again. On Twitter she explains why the “mutiny” is so important.

8.40 a.m.: According to the police, the “Meuterei” bar in Reichenberger Strasse has been cleared.

8.37 am: According to estimates by police spokesman Thilo Cablitz, there are ten to 20 emergency services in the premises of the “mutiny” and are investigating them. Two people who were in the building were provisionally arrested. “Their identities will now be determined, then they will be released,” he said. It is about the suspicion of trespassing. However, since this is an offense against which the house owner would have to file a complaint, it was not yet clear whether the two people would also be prosecuted.

8.30 a.m.: Three suspects in connection with politically motivated damage to property have been arrested in Mitte, the police tweeted. During the night or early in the morning, several high-quality cars across the city were set on fire. “Our LKA has taken over the investigation and will also check whether there is any connection to the evacuation of a scene location in Kreuzberg taking place today,” the police announced on Twitter.

8.27 a.m.: Almost 50 people are standing on the corner of Reichenberger Strasse and Ohlauer Strasse and loudly vent their anger about the eviction.

8.18 am: The “Meuterei” neighborhood bar is cleared. Two people who appear to have been in the room are handcuffed away by the police.

8.11 a.m.: At the corner of Reichenberger Strasse and Lausitzer Strasse, smoke pots are ignited. “At the info point it gets colorful! Smoke pot on the street and firecrackers in the direction of the cops,” tweeted “People for the Pack”.

8:05 am: The bailiff enters the building through the back entrance.

Protests against the eviction of the Kiezkneipe “Meuterei” – the pictures

8.02 a.m.: The police enter the building in which the left scene bar “Meuterei” is located. From the demonstration on Reichenberger Strasse and the corner of Lausitzer Strasse, individual firecrackers were detonated. It is about 50 meters from the entrance to the “mutiny” within earshot. A spontaneous rally has formed at the corner of Reichenberger and Ohlauer Strasse.

The scene also observes the process and tweeted: “#keinebeutemitdermeute police go into the side entrance to the pack with technical equipment”.

7.58 a.m.: Most of the shops in the cordoned off area are not open that morning. “We don’t have any customers at all,” complains the owner of a bakery shop, who stands in the sun in front of her empty shop.

7.49 a.m.: The barriers around the “mutiny” are necessary “to guarantee the freedom of movement of the emergency services and the bailiff,” says Anja Dierschke, spokeswoman for the Berlin police, before the planned evacuation.

The police estimate that around 450 demonstrators have gathered at the corner of Reichenbergerstrasse and Lausitzer Strasse. According to spokeswoman Anja Dierschke, a total of twelve protest events related to the eviction of the mutiny have been registered throughout the day. Fog pots and other pyrotechnics have already been ignited several times, reports the Berlin police.

7.38 am: “It is problematic that so many emergency services are here and the demonstration cannot take place within sight,” says Hakan Tas from the left-wing faction on the verge of the pending eviction of the “mutiny”. The police have set up a restricted area around the mutiny.

7:20 am: “For 15 to 20 people who tried to enter the lane and roll out a banner at Kotti, they just tried. Our colleagues prevented that and emphatically led them back to the sidewalk,” tweeted the police Berlin.

7.15 am: The demonstration against the eviction of the “mutiny” is on the corner of Reichenberger Strasse and Lausitzer Strasse. In an announcement, the demonstrators criticize the “cleaning up of the neighborhoods for profit interests”. They chant: “The pubs are for those who drink in them!” Then music is played. At the Kottbusser Tor, however, there are said to be the first arrests, according to the demo.

7.12 a.m.: According to the organizer, the protest march has grown to 400 to 500 participants. The demonstrators shouted loudly: “All together we will prevent the evacuation!”

6.58 a.m.: The scene is determined to thwart the evacuation of the mutiny. “Today one more place and Berlin another piece of Kiez culture should be taken away from us. The Meuterei should be cleared with a martial police presence, as it was already shown on the previous days. Defend the Kiezkultur! The Meutereibeibe!”, So one Tweet from “Black Palms”.

6.57 a.m.: On a roof on Kottbusser Damm the protest march is greeted with pyrotechnics and a waved flag, shows a tweet from “Outskirts”. There is a sulphurous smell over the Kottbusser Tor.

6.55 a.m.: The demonstration that started in the Schillerkiez is now moving over Hermannplatz. About 200 people, mostly dressed in black, cross the street, it’s peaceful.

6.43 a.m.: There are also links to the protest events in the “Autonomous Demoticker for Berlin” on the Telegram platform.

6.20 a.m.: The mood is aggressive. “The roofs around the mutiny are already closed with cops,” tweeted “People for the Pack”. In the photo of the tweet, police officers can be seen on roofs in Reichenberger Strasse. There is the “Meuterei” pub, which is to be cleared from 8 a.m.

6.18 a.m.: The demonstration under the motto “Mutiny remains” on Herrfurthplatz starts moving towards Hermannplatz and Kottbusser Tor. The left-hand bar “Syndikat”, which was cleared in August, tweeted live from the start.

Eviction of the “mutiny”: Several protests and rallies planned

The demonstration on Herrfurthplatz, which started in the immediate vicinity of the left-wing bar “Syndikat”, which was cleared in August, should not be the only left-wing protest that morning. Under the motto “Riot and Remmidemmi against eviction”, the autonomous housing project “Köpi” at 137 Köpenicker Strasse in Mitte should also start at six o’clock. From there a protest march was planned across Mariannenplatz and Waldemar, Dresdner, Oranien and Adalbert, also to Reichenberger Strasse.

The Schöneberg youth center “Potse”, which is also about to end, also made mobile. From there, supporters of the mutiny also wanted to move from 6 a.m. to Reichenberger Strasse via Mehringdamm and Gneisenaustrasse, among other places. This protest is even registered until 7 p.m.

A North Tyrolean storms to World Cup gold at the age... US whistleblower Snowden has become a father