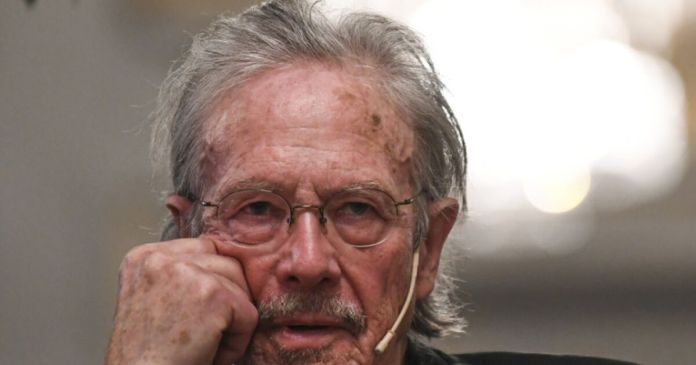 The former orcharder, who has the word in the story, was one in his youth who sometimes gets mad and verbally lashes out. Sayings like: “Moody like an orcharder” are circulating in the village. It gets worse, people avoid contact, and so in the end he just seems to be referring to himself when he goes cursing through the empty village: “Spaltpilz!” – “Untermensch!” – “Worm core!” The gardener becomes a wanderer. Walking has long been one of Handke’s main motives, and so the gardener also becomes a hiker. He moves “all over the country” and nothing suits him. Optionally, he accuses those who meet him of too broad or too narrow shoulders, too high or too low foreheads, wrong hair color or unfavorable leg length. And the mediocrity doesn’t suit him at all.

These “speech crusades” seem to lead directly to the Holy Land, many allusions to the Old Testament are incorporated. And so the casting out of demons is like a biblical miracle, achieved by a “good viewer” who gives the angry wanderer unquestionable love and genuine understanding. He even puts up with being held in his arms: “There you are for me!”

So much empathy rubs off. From then on, the narrator, who translates over a large lake into the “other country”, gently takes care of the leeches in the boat (which of course scorn him) and the grasses on the horizon: “Up close, they would never have come so close to me.” The tone that was struck changes radically, the growling and barking turns into a whisper: “The walking wind put my arm around my waist, even for a long time afterwards,” it says, or: “There were obstacles in the way, obstacles around Obstacle: welcome, obstacle, and please, another obstacle, and another – oh obstacle joy. ”

If you are not sure whether it is a self-persiflage, Handke adds one more thing to his story: Anyone who loses their uniqueness by adapting and integrating will in future be confused – in the case of the orchardist, for example Ski jumper, a bar pianist, a celebrity lawyer, a cartoonist or a dead farmer: “How that, farmer, you live ?!”

“My day in the other country” fits in seamlessly with Handke’s work, from the radical opposition of the “public abuse” to the many walks and encounters undertaken on stages and between book covers to his novel “Die Obstdiebin” (2017): Wie There he meets in the end a partner, like there everything ends in a final, conciliatory celebration. “The following years were years of harmony.” To rely on it would, of course, be deceptive. The “Day in the Other Country” closes with a familiar cry: “Are you all there?” But we have known since childhood: Wherever the Punch is, the crocodile can’t be far either.

SHE Japan Studio loses another talent –

Westbahn route: Without government aid, the number of trains could be...

The mood of the German company bosses is clouding over