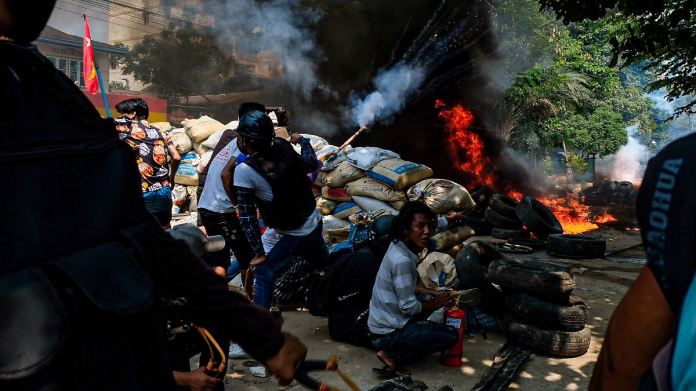 Myanmar has its bloodiest day
Protesters killed by headshots

The violence in Myanmar is endless. Police and military are shooting at civilians, and media reports say that more than 90 people lose their lives in nationwide protests. While the EU and the US react with horror, Russia describes Myanmar as a “reliable ally”.
More than 90 people have been killed in nationwide demonstrations against the military in Myanmar. The newspaper “Myanmar Now” reported, citing figures from 40 cities. In contrast, the newspaper “The Irrawaddy” spoke of 59 deaths, including three children aged seven, ten and 13 years. According to the United Nations, it is the “bloodiest day” since the coup in early February. “The violence is completely unacceptable and must stop immediately,” said a statement.

On the Army’s official memorial day, protests against the takeover broke out in large parts of the country, such as the trading metropolis of Yangon, the northern Mandalay region and southern Bago. Military members and police officers are said to have used live ammunition and targeted headshots against unarmed civilians.

Diplomatic representatives reacted with horror. The European Union spoke on social media of a day of “terror and dishonor”. Killing unarmed civilians and children is inexcusable. The US ambassador also condemned the military’s actions. “The bloodshed is horrific,” wrote Thomas Vajda on Twitter. The Myanmar military has brought shame on itself by shooting at “unarmed civilians,” wrote British Ambassador Dan Chugg on Twitter.

According to the state agency Tass, Russian Deputy Defense Minister Alexander Fomin also took part in the parade. Accordingly, Russia and Myanmar want to strengthen their relations. Both states wanted to develop military and military-technical cooperation, said Tass. Fomin called Myanmar a “reliable ally and strategic partner in Southeast Asia and the Pacific”. Myanmar’s commander in chief, Min Aung Hlaing, said Russia was a “true friend”, according to the BBC.

A 21-year-old civilian named Chit Bo Nyein is believed to be among the victims in Yangon. Nyein was helping out in his family’s tea shop when he was shot, said a family member. According to estimates by the prisoners’ aid organization AAPP, almost 3,070 people have been arrested so far. At least 328 were killed. The military had put a coup against the de facto head of government Aung San Suu Kyi at the beginning of February. The 75-year-old has been under house arrest since then and has been accused of various offenses by the judiciary. The protesters are calling for the restoration of Suu Kyi’s civilian government.

In a speech in the capital, Naypidaw, the Armed Forces Commander in Chief Min Aung Hlaing defended the military takeover as “inevitable” because the Suu Kyi government and its party were involved in “unlawful acts”. He stated that he wanted to protect democracy and again promised to hold elections, but without giving a date.

Stabbed visitors with a knife on New Year’s Eve

Influencer Josi Maria dies of anorexia during the holidays

Frank Rosin horrified over 228 dishes on the menu

Instead of Christmas parties: 365 euro vouchers for employees

Corona separates the wheat from the chaff