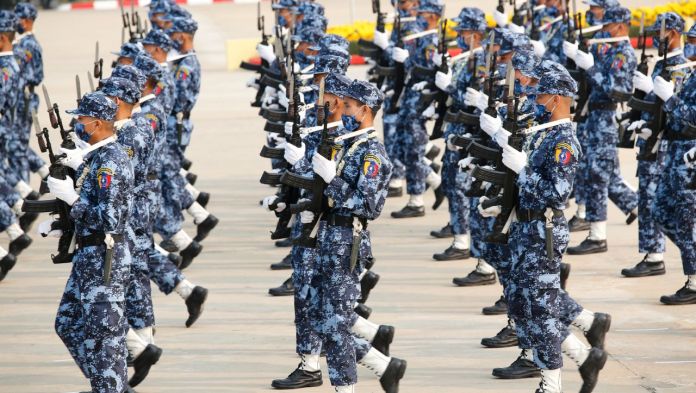 After its violent seizure of power in February, Myanmar’s military wanted to demonstrate its strength with a large parade on Saturday – and in doing so, violently ended protests against the army. According to eyewitnesses and news agencies, a total of 16 people died, nine of them in Yangon alone.
“Today is a day of shame for the armed forces,” said the opposition movement spokesman CRPH on an online forum. The military government is celebrating its strength “shortly after killing 300 innocent civilians.”
According to the CRPH, a total of 328 civilians have died since the military junta’s coup in February. Other non-governmental organizations speak of a total of 280 deaths.

On “Army Day” on Saturday, soldiers with torches and flags, flanked by military vehicles, marched through the capital Naypyidaw. The head of the military junta, General Min Aung Hlaing, again defended the military coup of February 1st and promised to hand over power to a new government after new elections.

State television had already warned the protesters on Friday evening: one should learn from the tragic, ugly deaths of the past few weeks “that one runs the risk of being shot in the head or in the back.”
Since the military coup, the junta has faced massive protests against which it has acted extremely brutally. More than 2,600 demonstrators have been arrested since the protests began. The demonstrators are demanding, among other things, the release of the deposed de facto head of government Aung San Suu Kyi and a return to the democratic process.

With the “Army Day”, Myanmar actually commemorates the beginning of the resistance against the Japanese occupation. Foreign government officials usually also take part in the military parade on the occasion.

Since the military junta is not recognized by many countries, only eight foreign delegations took part on Saturday, including representatives from China and Russia.

Paris Commune: “The ground is covered with corpses”

Health – when will the Covid-19 vaccination for children come? ...

RB Leipzig until the end of the year without Henrichs: “Will...