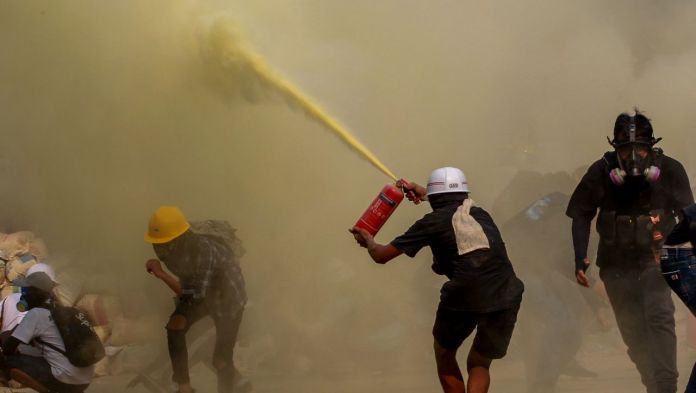 Last Saturday is a festive day for Myanmar’s coup leader Min Aung Hlaing. On “Armed Forces Day” the military celebrates itself every year, at a parade in the capital Naypyidaw it presents its tanks and missiles, soldiers march in formation. Representatives from Russia, China, India, Pakistan, Bangladesh, Thailand, Vietnam and Laos are present, giving the coup regime legitimacy.
Before he goes to the banquet in the evening in white gala uniform, Min Aung Hlaing gives a speech – and is sufficiently chutzpah for the following sentence: “The military reaches out to the whole nation to protect democracy.”
The next day, photos were posted on social media showing a smoldering pile of burned car tires. There is something in it that looks like a humerus and a human skull. Allegedly the remains of a father of four from Mandalay, who was careless enough to step outside when soldiers marched into his Min Tal Ei Kin neighborhood that night. They are said to have shot the man in the hip and then burned him alive.
SPIEGEL was unable to independently verify the case, but in the background men can be seen in traditional longyi wrap skirts, which suggests that the photos actually come from Myanmar.

At least 114 dead across the country – in one day

She shot 27 people in the largest city of Yangon alone. They killed their fellow citizens in Kawthaung on the southern border with Thailand, in Pathein in the Irrawaddy Delta, in the mining town of Hpakant in the far north. Fatal bullets struck a 13-year-old at her family’s home in Meiktila and a five-year-old in Mandalay. Shots were also fired at the American Center in Yangon, run by the US embassy. A fighter jet bombed a rebel base in the Karen State border area.

In one list, the research medium »Myanmar Now« came to 114 deaths in a total of 44 localities across the country for Saturday. Around a quarter of all Myanmar people who have been killed by the military and police since the coup on February 1 died on that single day. The military followed through on the previous evening’s threat on state television that participants in demonstrations ran the risk of being shot in the head or back.

It is possible that the conflict in Myanmar is entering a new phase. In the first four weeks after the coup, the security forces – by their standards – still allowed a comparatively large amount of protest. From the 28th day onwards, shooters executed individual protesters practically every day, often with targeted head shots. Four more weeks later, the last trace elements of scruples and humanity have completely evaporated.

The military want to bring about peace in the cemetery

If one takes the events of Saturday as an indicator, the military commanders have apparently abandoned the idea of ​​establishing a halfway functional government. Apparently their only concern is to bring about a peaceful cemetery in the country by terrifying every citizen. Seen in this light, all the protesters who the putschists refer to as “terrorists” are right.

Former US Ambassador to Myanmar, Scot Marciel, tweeted after the Bloody Saturday that the Myanmar military was “beyond all reason”; he sees no value in continuing a dialogue “until they signal that they are looking for a way out.”

The US Secretary of State and Defense Antony Blinken and Lloyd Austin have expressed their horror, the general staffs of numerous Western countries, including Germany, condemned the actions of the Myanmar military and called for restraint. The UN Special Rapporteur on Myanmar, Tom Andrews, described the junta’s actions as “mass murder.”

The West has little help to offer Myanmar

These are the right words, but in all likelihood it will stay with words. By taking part in the parade, Russia and China have just indicated to the generals that they do not intend to break with them; As permanent members of the UN Security Council, they should prevent decisive acts against the coup government. Other than moral indignation and unilateral economic sanctions, which have proven ineffective in the past, the West has little to offer the people of Myanmar.

According to information from SPIEGEL, some democratic politicians and activists have already fled to Myanmar border regions that are controlled by ethnic rebel groups. They are safer there than in the heartland, but far from the population centers; the geographical and power-political periphery are congruent. Already after the 1988 uprising, student leaders escaped into the mountains and jungles, and from then on played practically no role in the fate of Myanmar.

The “Day of the Armed Forces” originally had a different name, namely “Day of Resistance”. He recalls how Myanmar associations rose against the Japanese at the end of World War II – brutal occupiers who subjugated the country regardless of human cost. Given how the means of power are distributed, comparable resistance seems like an almost impossible task today.

Police officer fired after death by black in the US

Berlin & Brandenburg: House of Representatives is planning a special Corona...

YOU must now know EVERYTHING about the Corona rules in Berlin!...

“In extreme circumstances, signs must be set”