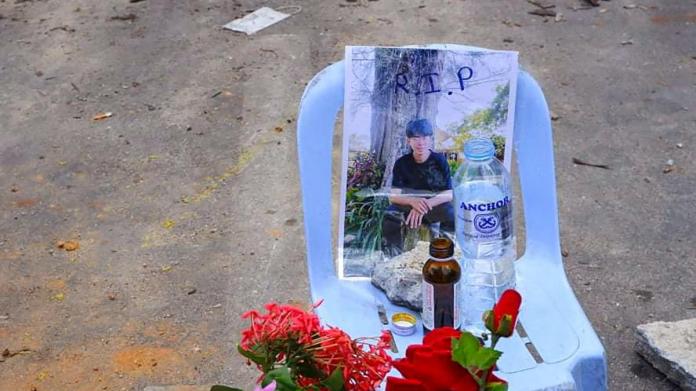 In Myanmar, military violence has reached a temporary peak in nationwide protests with more than 100 dead. The United Nations called Saturday the “bloodiest day” since the February 1st military coup.

More than 114 people were killed on “Armed Forces Day”, as the news portal “Myanmar Now” reported, citing figures from 44 cities. “The Irrawaddy” also wrote of more than 100 dead on Sunday, including several children and young people between the ages of five and 15. “The violence is completely unacceptable and must stop immediately,” said the UN. The UN special envoy for human rights in Myanmar accused the military of “mass murder” of their own people.

On the Army’s official memorial day, protests against the takeover broke out in large parts of the country, such as the trading metropolis of Yangon, the northern Mandalay region and southern Bago. Military personnel and police officers are said to have used live ammunition and targeted shots in the head against unarmed civilians.

“The bloodshed is terrible”

Federal Foreign Minister Heiko Maas (SPD) announced on Sunday that the pictures and news from the country were “deeply shocking”. The EU has made it clear that it will not accept the brutal crackdown on the people in Myanmar and has imposed sanctions on the military junta.

The military chiefs of around a dozen countries, including the United States, Great Britain, Japan and South Korea, jointly condemned the violence of the military junta. “A professional military follows international standards of conduct and is responsible for protecting – not harming – the people it serves,” said the unusual joint statement published on Sunday. The military chiefs called on Myanmar’s army to “end the violence”.

Diplomatic representatives reacted with horror. The European Union spoke on social media of a day of “terror and dishonor”. Killing unarmed civilians and children is inexcusable. The US ambassador also condemned the military’s actions: “The bloodshed is horrific,” wrote Thomas Vajda on Twitter. British Ambassador Dan Chugg wrote on Twitter that the Myanmar military brought shame on itself by shooting at “unarmed civilians”. “Today’s killings of unarmed civilians, including children, mark a new low,” tweeted British Foreign Secretary Dominic Raab.

According to the state agency Tass, Russian Deputy Defense Minister Alexander Fomin also took part in the parade. Accordingly, Russia and Myanmar want to strengthen their relations. Both states wanted to develop military and military-technical cooperation, said Tass. Fomin called Myanmar a “reliable ally and strategic partner in Southeast Asia and the Pacific”. Myanmar’s commander in chief, Min Aung Hlaing, said Russia was a “true friend,” according to the BBC.

Russian media reported that in addition to Russia, countries such as China, India, Pakistan, Vietnam and Thailand had also sent representatives. Russia’s invitation was a reaction to Myanmar’s participation in the military parade in Russia last summer. Russia is reportedly the second largest arms supplier to Myanmar after China. The United States, the European Union and the United Kingdom imposed sanctions following the February 1 military coup.

Commander in Chief of the Armed Forces defends takeover

A 21-year-old civilian named Chit Bo Nyein is believed to be among the victims in Yangon. Nyein helped out in his family’s tea shop when he was shot, said a family member of the German press agency. According to estimates by the prisoners’ aid organization AAPP, almost 3,070 people have been arrested so far. At least 328 were killed, according to the AAPP.

In a speech in the capital, Naypidaw, the Armed Forces Commander in Chief Min Aung Hlaing defended the military takeover as “inevitable” because the Suu Kyi government and its party were involved in “unlawful acts”. He stated that he wanted to protect democracy and again promised to hold elections, but without giving a date.

People also took to the streets on Sunday. Images were shared on social media that the security forces continued to crack down on the resistance. According to media reports, there were again deaths.

According to the media, police officers and soldiers shot at the mourners present at a funeral of a killed student in southern Bago. In Yangon, the military is said to have fired on residential buildings in districts where protests repeatedly occur. “People are now afraid to go out and some are injured,” said a 24-year-old resident of the dpa. In Mandalay, dozens of houses were reported to have burned down that morning.

According to estimates by the prisoners’ aid organization AAPP, almost 3,070 people have been arrested so far. At least 423 were killed, according to the AAPP.

PS Plus: This is how much you saved with the subscription...

DSDS: next RTL expulsion! HE won’t be in the final How non-communicable diseases affect the course of Covid – knowledge