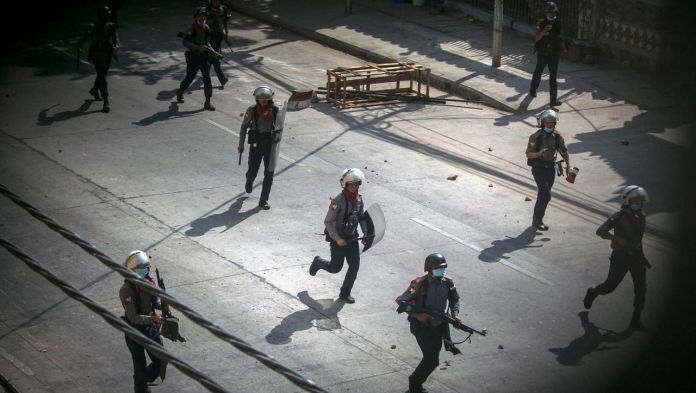 The police in Myanmar are increasingly brutal against demonstrators. According to the United Nations, 38 people were killed in protests against the military junta on Wednesday.

The country had thus experienced the “bloodiest” day since the military coup on February 1st, said UN envoy Christine Schraner Burgener at a video press conference. In total, more than 50 people have been killed since the protests began.

In various parts of the country, security forces fired live ammunition again on Wednesday, killing at least 18 people, local media and eyewitnesses reported. Photos of corpses covered in blood circulated on social networks. Dozens of demonstrators are said to have been injured, some seriously.
A young man was reportedly shot dead in Myingyan in the north of the country and another in Mawlamyine in the south. Two other protesters, a 37-year-old man and a 19-year-old woman, were killed in the city of Mandalay, according to the Myanmar Now portal. Seven people died in Monywa.
“There were about 20,000 demonstrators on the street, and I am sure that the security forces belonged to the army,” a journalist told the dpa news agency on site. There were also at least seven victims in the former capital Yangon, the hotspot of the protests.

The military had put a coup against Prime Minister Aung San Suu Kyi about a month ago. The generals cited irregularities in the November parliamentary elections as the reason. Suu Kyi won this by a clear margin. Observers did not document any signs of major electoral fraud.

The 75-year-old Nobel Peace Prize laureate is under house arrest and has to answer for various allegations in court. The demonstrators are calling for the politician to be reinstated. Aung San Suu Kyi had been under house arrest for 15 years during the almost 50-year military dictatorship. At that time the army had brutally suppressed any resistance in the country.

Apple Pay: This is how the setup works on iPhone, iPad...

“Covid cases explode” – France soon in the grip of mutations?

Family hardship fund is expanded to include farmers

Enjoy the urban living of tomorrow with VIDO