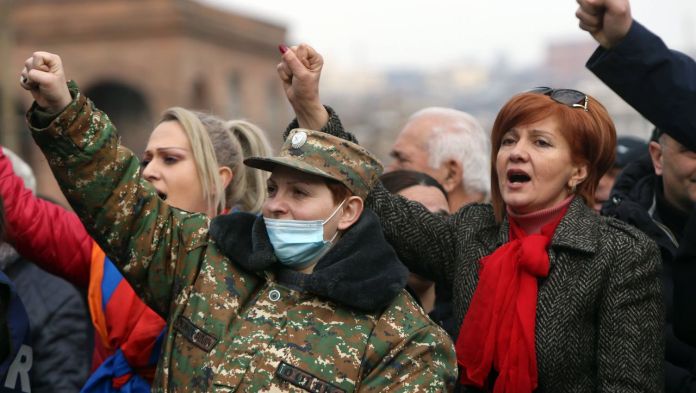 In the summer new fighting broke out between Armenia and Azerbaijan over the Nagorno-Karabakh conflict region. Now, more than four months after the end of the fighting, Armenia has lifted the state of war for the region in the South Caucasus. The parliament in the capital Yerevan voted with an overwhelming majority, as reported by the Armenian media. Azerbaijan had already lifted the state of war in December.
The Armenian opposition had long requested this step. Martial law restricts the rights of the opposition and democracy as a whole, argued representatives. A new parliament will be elected early in the ex-Soviet republic in three months.

In the war from September 27 to November 9, Armenia’s neighboring country Azerbaijan reclaimed large parts of the territory it had lost in the early 1990s. More than 6,000 people died in the clashes, and many places in Nagorno-Karabakh were destroyed.

In the autumn, both sides signed a peace agreement brokered by Moscow. The agreement between the warring neighboring states ended the heavy fighting in the Caucasus region of Nagorno-Karabakh, but resulted in significant territorial losses for Armenia. Since then, the country has been in a domestic political crisis.

Sead Kolasinac is presented at Schalke 04

The Weeknd is also raging: Bieber angry about the Grammy nomination

LIVE: The decision at the Ski Flying World Championships in Planica

Yes Morant of the Memphis Grizzlies will be out three to...

Lockdown: Government advises on how to proceed