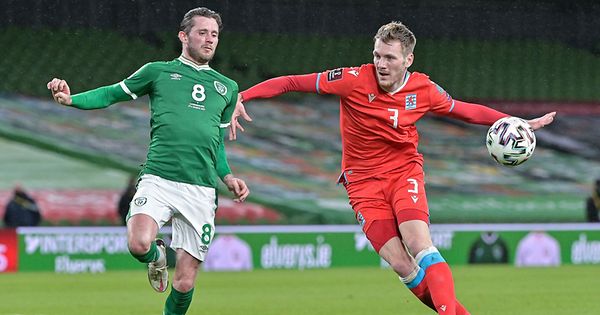 The FLF selection got three points against Ireland at the beginning of the World Cup qualification. In Dublin, Luxembourg won thanks to a goal from Rodrigues.

The FLF selection got three points against Ireland at the beginning of the World Cup qualification. In Dublin, Luxembourg won thanks to a goal from Rodrigues.

The national soccer team started the World Cup qualifying with a strong performance. On Saturday evening, the Luxembourgers were happy about a 1-0 win against Ireland in Dublin. Rodrigues scored the decisive goal in the closing stages.

The day had started in shock for the FLF selection: Malget had tested positive for the corona virus and had to be isolated. However, since all other tests were negative, the game could be played.

Shock before the game against Ireland. After a positive Corona test, national soccer coach Luc Holtz has to do without a player.

After Gerson’s mistake with the 0-1 loss to Qatar the 31-year-old had to go to the bench against Ireland. Mahmutovic replaced him. Marvin Martins moved into the starting line-up for the injured Pinto.

At the Aviva Stadium in Dublin, both teams fought at eye level right from the start. The hosts had the first good opportunity after 17 minutes, but Moris prevented Collins from going 1-0 with a strong save.

Goalkeeper Anthony Moris is on hand against Alan Browne and Ireland.

Chances were scarce in the first half, but Vincent Thill and Co. showed that they can stand up to their opponents. The Luxembourgers lacked courage in the game forward.

Rodrigues had this after 41 minutes, when the offensive player took heart and surprised Ireland’s goalkeeper Bazunu with a lob from over 30 meters. The goalkeeper was still able to prevent the goal.

In the second half, Ireland wanted to send a direct signal and exert pressure. The first good opportunity came on the visitors’ account, however, with Olivier Thill’s free-kick landing just wide of the goal.

Vincent Thill (r.) Is one of the best Luxembourgers against Enda Stevens and Co.

In the 55th ‘ Ireland’s Browne missed the opposing box. Six minutes later it was dangerous again on the other side. After a strong solo by Vincent Thill, goalkeeper Bazunu was only able to prevent the 1-0 for Luxembourg with difficulty.

A few minutes later, after Olivier Thill lost the ball, the guests were lucky that Robinson’s shot went well over the goal. However, the FLF selection was not unsettled and also created opportunities. Sinani’s shot in the 69th ‘ but was too imprecise.

Both teams were now in an open exchange of blows. Ireland’s Collins attempted an overhead kick that narrowly missed.

When everything pointed to a draw, Rodrigues benefited in the 85th ‘ from an inattention in the opposing defense, captured the ball and put Luxembourg in the lead with a long-range shot.

Luc Holtz is happy. The national coach praises the FLF selection after the 1-0 win against Ireland.

In the closing stages, the guests defended in a concentrated manner. The cheers after the whistle could not be ignored in the Aviva Stadium. For Luxembourg it was the first away win in a World Cup or European Championship qualification since the 2-1 win against Switzerland in 2008.

On Tuesday (8.45 p.m.) the FLF selection will meet Portugal at the Stade Josy Barthel.

Read more on this

The Luxembourg national football team had to admit defeat after a strong performance against Ukraine with 1: 2. Rodrigues was the unlucky fellow of the evening.

The Astrazeneca files: How the dispute between the EU, Great Britain...

The federal government wants to start vaccination against the coronavirus as...

The charging infrastructure in Germany is so good: obstacle course