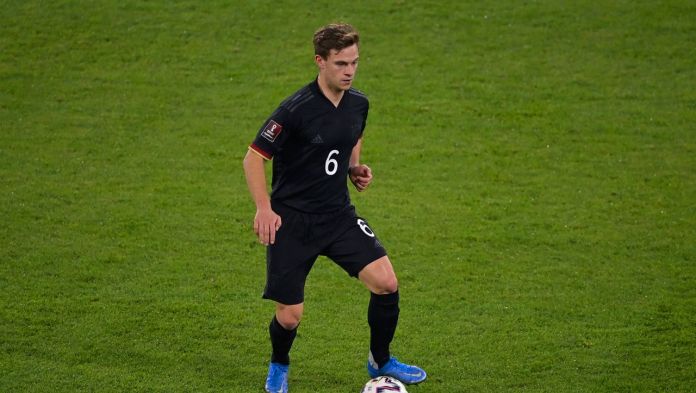 His decisions have been made, said Joachim Löw, also with regard to the role of the right-back. Only in an emergency, when there was an acute problem on the right-hand side, would he resort to a tried and tested solution that was needed in a different position. However, Löw was not talking about Joshua Kimmich here. Instead, it was about Philipp Lahm.
Two days before the 2014 World Cup quarter-finals against France, these sentences by Löw were made public about his then captain, the national coach told the weekly newspaper “Die Zeit” (you can read the statements here). The interview was probably conducted before the round of 16 against Algeria, which the DFB-Elf only won in extra time and in which Shkodran Mustafi, the substitute right-back, was seriously injured. Lahm, actually in the defensive midfield, moved back against Algeria as an emergency for Mustafi and from then on played as a right-back until the World Cup title.
What does all this have to do with Joshua Kimmich? Well, there are parallels between the 26-year-old from Munich and one of his predecessors at FC Bayern and in the national team. Kimmich began his professional career in central roles, switched to the right side at Bayern in his third year and also got stuck with the DFB team there. Meanwhile, Kimmich has returned to the defensive midfield and will play there in the evening in the World Cup qualifier in Bucharest (8.45 p.m. live ticker SPIEGEL.de; TV: RTL). Lahm, in turn, played most of the time as a full-back before moving to midfield later in his career. Kimmich and Lahm are united by the gift of having been among the best in both positions in their time and actually being needed in both positions.
Personally, I feel most comfortable in midfield. Still, I can help the team as a right-back.
In 2014 there were many discussions about the ideal position for Lahm and now, in the run-up to the 2021 European Championship, there is another debate. Where should Kimmich play? In the central midfield of the 4-3-3 favored by Löw, where with Kimmich, İlkay Gündoğan, Toni Kroos and Leon Goretzka there are four potential regular players for three positions? Or on the right side of the defense, where there are many temporary but no permanent solutions? Löw himself says he will think about it and make a decision in May.

The lack of an alternative at the highest level speaks for a move back to the right side. Especially since at the European Championships two opponents are already waiting in the group stage with France and Portugal, who can offer opponents with Kylian Mbappé or Kingsley Coman and Cristiano Ronaldo or Raphaël Guerreiro who will challenge the German right-back considerably.

“It feels like the discussion will never end,” said Kimmich himself on Saturday. “Personally, I feel most comfortable in midfield. Still, I can help the team as a right-back. I’m not someone who defends against it. ”
As with Bayern, Kimmich is growing increasingly into the role of the leader. He’s noisy and also committed off the pitch. He embodies an incomparable will to win, he never avoids a duel. And as a kind of quarterback, Kimmich is also playfully style-defining for this team, he is the starting point for many attacks. If Manuel Neuer, who celebrated his 35th birthday the day before the Romania game, is no longer available, Kimmich has a good chance of succeeding him as captain. Lahm became captain at Kimmich’s current age of 26, but only because Michael Ballack missed the 2010 World Cup with an injury.
There they are again, the parallels between Kimmich and Lahm. But on closer inspection, there is a crucial difference: the midfielder Kimmich cannot be replaced by the national coach. Kroos, Gündoğan, Goretzka, also Gladbach’s Florian Neuhaus – the competitors are outstanding eighth, but they all need protection. That was different in 2014 when Bastian Schweinsteiger, who was ailing at the beginning of the tournament, returned to the team and Lahm was free for the right side.

Against Romania Lukas Klostermann will appear as right-back. However, the Leipziger should not get beyond the status of an emergency solution. With Emre Can, Matthias Ginter, Thilo Kehrer and Benjamin Henrichs there are other candidates who have shared the position over the past few months. None of this quintet has all the qualities that a modern full-back needs: tackling strength, speed, flanks, dribbling, passing security, positional play, tactical skill.

Whoever is most likely to combine that is not currently part of the senior national team. Ridle Baku plays the preliminary round at the U21 European Championship and is one of the top performers. Löw’s decision to do without Baku surprised at first. But maybe he wanted to give Wolfsburg, who was already involved in nine goals in this Bundesliga season, the tournament experience with the U21s in order to bring him back. And Kimmich could stay in midfield in the long term.

Ostrum AM: ECB guidelines not a “game changer” – reluctance to...

Fireball in the sky over Germany – researchers are puzzling

CDU calls the behavior of the SPD “shabby”