Despite serious allegations by the imprisoned Alexei Navalny, the Kremlin sees no problems with medical care in Russian penal camps. The Kremlin critic complains of a pinched nerve.

The Kremlin critic Alexej Navalny, who is imprisoned in a Russian prison camp, claims to suffer from a dangerously pinched nerve in his back. Because of inadequate medical treatment, he is threatened with losing his right leg, in which he sometimes no longer feels, said the 44-year-old on Friday on the Instagram online network.

Apparently he had pinched a nerve and was in severe pain because of the constant hunched over sitting in police cars and court cages, Navalny said. But so far he has only received two painkillers. He has been waiting for the result of a medical examination for a week.

The former owner of the Russian oil company Yukos and prominent Kremlin critic Mikhail Khodorkovsky, who himself spent ten years in prison after a controversial trial, once warned him that becoming seriously ill in a Russian prison could be a death sentence Navalny continued and quoted Khodorkovsky: “Nobody will treat you. If you get seriously ill, you will die”.

Navalny had denounced the conditions in the camp in two formal letters of complaint on Thursday and accused the prison guards of torture through “sleep deprivation”. He requested thorough treatment for severe pain in his back and right leg. His lawyer Olga Mikhailova said that his confidants feared “for his life and health”. His wife Julia appealed to President Vladimir Putin to release her husband.

Putin’s greatest adversary was the victim of a poison attack in Russia last August, for which he blames the Russian secret service and the Kremlin. The 44-year-old was flown to Germany and treated at the Berlin Charité. He was arrested immediately after returning to Moscow in January.

Navalny was sentenced to more than two and a half years in a prison camp in February for alleged violations of his probation requirements. He is currently detained in the infamous Penal Colony No. 2 in the small town of Pokrov. In the Instagram online service, he recently referred to the facility as a “concentration camp”. The US and the EU imposed sanctions on Russia at the beginning of March for the action against Navalny.

The nightmare of the Berlin resident Alexander K.

The long ordeal of a Berlin artist 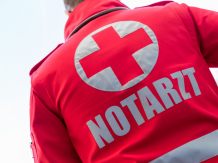 Ried pays off a bit with a broad chest, even with...