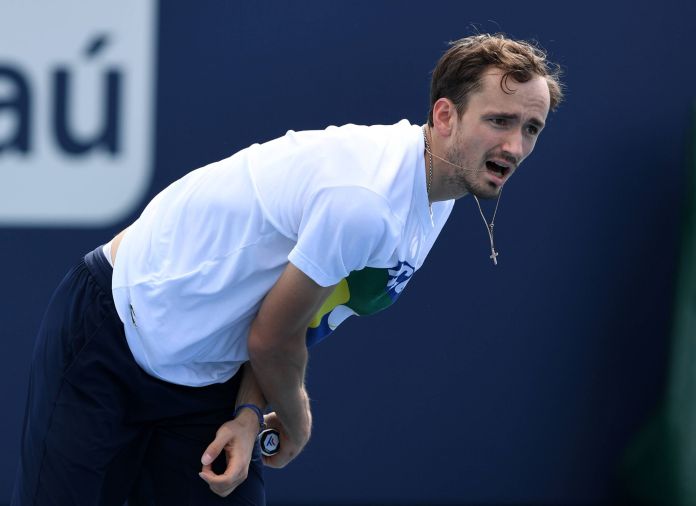 Usually the first Tennis 1000 tournament of the year is played in Indian Wells. But what is normal in times of pandemics? Now Miami is the first and only US station in the spring, and the traditional clay court tournament in Houston has also been canceled. And other things are different in Miami: Novak Djokovic, who prefers to spend time with his family, Rafael Nadal (back), Dominic Thiem and Roger Federer have all canceled. Serena Williams is also missing.

Miami 2021 will be the first Masters 1000 event since Paris-Bercy 2004, in which neither Djokovic, Nadal nor Federer will compete. Andy Murray, who was given a wildcard, also had to pass injured, Stan Wawrinka is not in Florida either.


Australian Open finalist Daniil Medvedev leads the field. The Russian has been the first number two in the ATP ranking since 2005 (Lleyton Hewitt) for a little over a week, who does not come from the “big four” (including Murray). But this position does not give him extra pressure, he assures. “It just gives me an energy boost. I just want to try to play better and better to show myself that I deserve it, ”said Medvedev. After 20 wins en suite, including 12 wins over top ten players, the Russian only lost in the Melbourne final.

Alexander Zverev, whom the narrow US Open final defeat against Thiem last year made “even hungrier”, Andrej Rublew and Denis Shapovalov are all in the circle of favorites, even if only two of the top 6 are at the start.

Shapovalov had already mentioned another reason in Dubai that is causing discussions. I am convinced that there will be a lot of rejections because the prize money is too low. ” Where deep is relative. Shapovalov earned a good $ 78,000 for his semi-final qualification in the Gulf emirate. A year ago, however, it would have been almost twice as much. “That’s not exactly motivating to play every week.”

Shapovalov points out the serious restrictions that players have to submit to. This includes the isolated life in a bubble during the tournaments and, above all, the restriction of companions to a minimum, which, for example, make it practically impossible for family men like Federer, Djokovic or Murray to travel with their relatives. Djokovic’s rejection could be interpreted in this direction, because money probably doesn’t play that role for him.

The prize money was, however, flattened mainly to the disadvantage of the top stars. Compared to the last event two years ago, it fell between 9 percent (1st qualifying round) and 78 percent (tournament winner). The average player should have to “bleed” less, was the intention of ATP and the organizers.

Alexander Zverev, like others, was upset about the ATP after his Acapulco title. “They are only focused on keeping the financial situation in order,” said the 23-year-old German of the “Bild” newspaper. “The players’ opinion is not their priority. That’s a shame because the ATP should be there for the players. At the moment they are obviously more there for the tournament organizers. ” As before, Zverev had also asked Djokovic to play all tournaments in one place in order to minimize travel and thus the risk of corona infection. “The ATP was not interested,” said the seventh in the world rankings.

Another reason would be to make the trip to the USA with all the restrictions and bubble lives for just one tournament. Missing spectators and thus missing atmosphere is another. This had recently also blamed Wolfgang Thiem for his son’s playful crisis in the “Salzburger Nachrichten”. “Dominic is just the type who needs the emotion and mood on the pitch and, apart from that, his freedom so that he can get his maximum performance,” Thiem said at the time.

The price reduction also plays a role, even if his son is now a multimillionaire himself. “Is someone who suddenly earns only half for his work, regardless of the job, just as motivated as before? I do not think so.”

The subject is complex and one must not forget the human factor behind the sports stars. For some, traveling is almost something new again: for example, Ashleigh Barty, who is number one in the world. The Australian has traveled almost 50 hours from “down under” to Florida. Barty was only in Australia for a year mainly because of the coronavirus pandemic, Miami is her first tournament outside of her home since February 2020. “It will be hard to play tennis again after such a trip,” said the 24-year-old, who Flight plan was also mixed up due to deletions. She is the defending champion.

“It was pretty tough to leave Australia and pretty emotional for me. But we’re excited to have the chance to play the whole season, ”admitted Barty. Your biggest competitors will probably be the now four-time major winner Naomi Osaka and the Romanian Simona Halep.

National League: The ZSC comes out of the second quarantine with...

These corona rules apply from today in Hamburg | NDR.de...