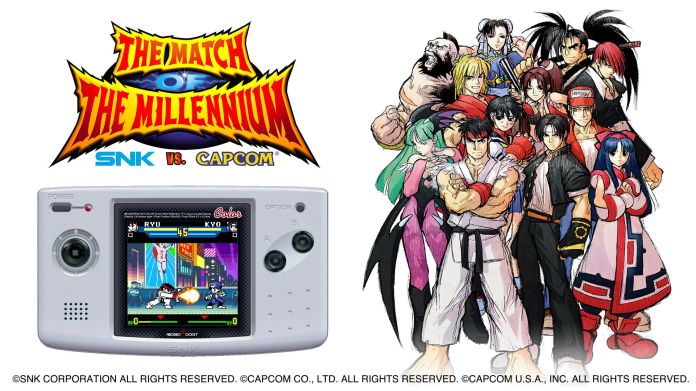 SNK has reissued some old NeoGeo games for Nintendo Switch. Now there is a first collection of the absolute cult titles, and it has succeeded.

The developer SNK Corporation is vehemently pursuing its course of bringing old cult titles to the Nintendo Switch. Above all, the focus has been on titles that used to run on the NeoGeo handheld, which is rather unknown in this country. The fighting classics “Fatal Fury: First Contact” and “The Last Blade: Beyond the Destiny” as well as “SNK vs. Capcom: The Match of the Millennium” appeared as new ports on Nintendo’s hybrid console in quick succession.

Retro gaming is now gaining even more momentum, because SNK has presented the “NeoGeo Pocket Color Selection Vol. 1”. Ten retro games can be found on it, including some of the most famous NeoGeo games ever: “SNK Gals’ Fighters”, “Samurai Shodown! 2”, “King of Fighters R-2”, “The Last Blade: Beyond the Destiny “,” Fatal Fury: First Contact “,” SNK vs. Capcom: The Match of the Millennium “,” Metal Slug 1st Mission “and” Metal Slug 2nd Mission “,” Dark Arms Beast Buster 1999 “and “Big Tournament Golf”.

The mix is ​​what makes the appeal

Fortunately, the new SNK collection creates a nice mix in the selection of titles. While the previously published games – “Fatal Fury”, “The Last Blade” and “SNK vs. Capcom” – gave the impression that it could be a pure fighting game collection, “Volume 1″ is about tons of action, especially with the ” Metal Slug “titles as well as a pinch of role-playing games with” Dark Arms Beast Buster 1999 “and a touch of sport with” Big Tournament Golf “. Very nice! Sure, fighting games still make up the bulk of the collection, but there are other genres as well.

The entire collection shows the strengths and weaknesses of the previously individually tested games. While “The Last Blade” and “Fatal Fury” were ingenious originals that have declined a lot and are more interesting for die-hard retro fans, “SNK vs. Capcom”, on the other hand, has always been a niche original that all players are now releasing the Nintendo Switch knows how to convince if you don’t mind the pixelated graphics and the beeping sounds.

From jewels to collectibles

“Samurai Shodown! 2” is a nice change in the collection. Unlike many of its genre colleagues, the battle title is very easy to control with just two buttons and is therefore perfect for beginners who want to quickly unlock special attacks and cards. “SNK Gals’ Fighters”, on the other hand, is a little gem, because the new edition was only available for a very short time and is a popular collector’s item with its nice graphics and its very own story mode.

“King of Fighters R-2” is also a fighting game, but introduces an innovative mechanic by using role-playing elements in which skills can be unlocked and distributed over the fights. A complete “Gamble in between” title is “Big Tournament Golf”, which is entertaining, but with few characters and just as few places offers little variety. “Dark Arms Beast Buster 1999”, on the other hand, is an absolutely captivating and complex role-playing game in which, as a ghost hunter, you search for your lost soul.

Every gamer should have it at home

That leaves the two “Metal Slug” games, which are great to play, but suffer a bit from the new technology. So our character now moves faster, while the backgrounds sometimes stand out too little to meet quick reactions and master the demanding level of difficulty. Nevertheless, the “Metal Slug” games with their “Run & Gun” gameplay are still fantastic cult titles that every gamer should have played once.

For many Switch owners it may seem strange to play “ancient” games on the new console by video game standards, with a small game window and a large, virtual NeoGeo console on the screen. But the “Neogeo Pocket Color Selection Vol. 1” combines almost all of the cult games that have ever existed for this handheld. Anyone who thinks anything at all about the history of video games will receive with the collection many of the games that in many cases laid the foundation for today’s bombast games.

“We are twins, but only in Germany”

Bayer Leverkusen in crisis – is Peter Bosz about to end?