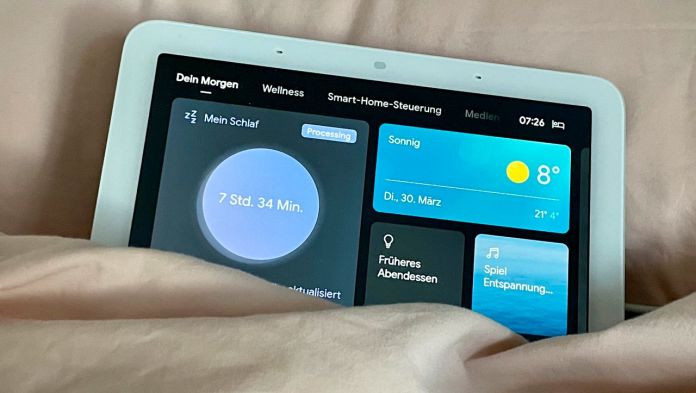 Hey Google, tell me a joke

How long the Nest Hub allows time to bring up the screen from very dark to very bright can be set to values ​​between five and 30 minutes. You have to try out what is best for you. In any case, what has always worked well is bringing the alarm clock to sleep with a casual wave of the hand.

This virtual snooze button is made possible by the same technology that is also intended to analyze the user’s sleep: Project Soli. Basically, this is a miniature radar that Google had already built into the Pixel 4 smartphone, for example, to enable contactless gesture control. Here it is used to show the display with a simple hand movement that you just want to doze off for a few minutes. Just a few.

But that’s just technological by-catch. First and foremost, the Soli sensor should record how intensely you move while you sleep. That’s why Google calls it sleep sensor here. And for it to work properly, you first have to calibrate it – by lying down in bed.
I compared Google’s evaluations with those of a Withings sleep sensor, which, for example, can still measure the pulse while lying under the mattress. The measurement results of the two devices were actually quite close to each other, were only displayed differently by the apps of the respective providers. At least one can say that Google’s sleep radar apparently works well and provides reliable data.
Whether you need it is another question. Many people should be content to listen to themselves in the morning to see whether they slept well or not. With the new Nest Hub on the bedside table, you can now ask, “Hey Google, how did I sleep?”
The spoken answer to this is pretty straightforward: “Quite relaxing, so and so many hours.” But on the screen or in Google’s Fit app on the smartphone, you can get a more detailed breakdown of how the night was, including an analysis of when and how often you snored and coughed, how warm it was in the bedroom and if possible Light disturbed sleep. The Nest Hub’s sensors make it possible.
What you do with this information is largely up to you. For example, the number of breaths per minute is displayed in the Fit app, but it does not explain why it is needed and whether the measured value is good or bad.

The Nest Hub is also designed to help you fall asleep. On the one hand, by dimming its screen, but above all by playing relaxing background noises on request.

Since Google built this feature, I can only assume that there are people who like it and who actually find it relaxing. I didn’t want to fall asleep while listening to “Heiteres Bachgplätscher”, “Rausch a river” or “Cozy open fire crackling”. But maybe it’s just a strange quirk of mine that most of all I enjoy silence when I fall asleep.

Google as a kitchen helper

However, besides the sleep sensor, the most noticeable innovation on the new Nest Hub is the improved sound. The first model still sounded a lot like cardboard. It was okay for news and podcasts, but not really for music. The second version now delivers 50 percent more bass and “room-filling sound,” according to Google.

I wouldn’t go that far, but the fact that the sound has been significantly improved is unmistakable, especially in direct comparison. The Nest Hub 2 sounds much rounder and now actually produces perceptible bass. This is sufficient as a kitchen radio or for the bedroom and also for YouTube and Netflix in bed, but it is not hi-fi.

But it doesn’t have to be, because even if Google emphasizes the capabilities as a sleep sensor, the new Nest Hub, just like its predecessor, is above all a control center for smart home devices and a smart web browser that can be used to read recipes to you.

It remains to be seen whether the new sleep sensor is needed. But even if you switch off the sleep sensor, the new Nest Hub offers a number of interesting uses. For example as a podcast player and talking cookbook in the kitchen or as a smart home control and digital picture frame in the living room.

Despite the substantially enhanced sound, it cannot replace a good smart speaker in terms of sound, but it can very often replace a tablet or smartphone – at least at home. I take it as a friendly gesture that the new model is also being offered 30 euros cheaper than its predecessor. I would now like to have an audio jack to which I could connect good active speakers.

We decide for ourselves which products we report in the Internet world and which we test or not. We do not receive any money or other consideration from the manufacturer for any of the test reports. For various reasons it can happen that we do not report on products even though we have corresponding test products.
We usually get test devices and review copies of games from the manufacturer free of charge for a certain period of time, sometimes even before the official release. In this way, our test reports can appear in good time or shortly after the product is published.

We only test pre-release versions or devices from pre-series production in special cases. We usually wait until we can get test devices or game versions that are identical to the retail versions. In some cases we also buy products ourselves at our own expense if they are already available in stores or online.

As a rule, test devices are sent back to the manufacturer after the end of the test. The exception are review copies of games and so-called permanent loans: For example, we have game consoles and smartphones in the editorial office that we are allowed to use for a longer period of time. For example, we can report on software updates, new accessories and new games or make long-term judgments.
DER SPIEGEL always bears the costs for travel to events, regardless of whether they take place in Germany or abroad. This also applies if, for example, a company takes over travel planning due to short-term appointments.

Events to which we travel at our own expense include the Ifa, CES, E3 and Gamescom trade fairs as well as events from companies such as Apple, Google, Microsoft or Nintendo. At conferences like the Chaos Communication Congress or the re: publica, like other press representatives, we usually get free press tickets because we report on the conference and are not traditional participants.

Since December 2016, Amazon ads containing so-called partner links can be found in some Netzwelt articles. If a user visits Amazon via such a link and buys online there, DER SPIEGEL receives a share of the sales in the form of a commission. The ads appear in articles regardless of whether a product test is positive or negative.

Mick Schumacher (21) will start in Formula 1 next season

Weather in Germany: Will the polar vortex bring a heavy onset...