The Turks start perfectly in the World Cup qualification: The second victory in the second game succeeds in a convincing manner against Norway. The Netherlands are struggling to win against Latvia. Luxembourg won late with a golden goal.
The Dutch national soccer team celebrated their first victory in the World Cup qualification in the second game. Three days after the false start with the 2: 4 against Turkey, the oppressively superior team of bond coach Frank de Boer struggled to a 2: 0 (1: 0) against outsiders Latvia on Saturday evening.

The Turkish selection celebrated their second clear victory. After the 4: 2 against the Dutch, the team prevailed 3: 0 (2: 0) against opening winners Norway and ousted the Scandinavians from the top of qualifying group G. In Malaga, Ozan Tufan (4th) scored for the Turks. , Caglar Söyüncü (28th) and Ozan Tufan (59th).

Before both games, the players pointed out the potential political power of football with clear visual messages. “Football Supports Change” was written on the black T-shirts that the Dutch wore until shortly before kick-off. Before their game, the Norwegians again drew attention to the human rights situation at World Cup hosts Qatar and encouraged possible imitators.

Ronaldo hit does not count

European champions Portugal gambled away a 2-0 lead in Belgrade and thus the possible win against Serbia. The selection for superstar Cristiano Ronaldo had to be satisfied with a 2: 2 (2: 0) in the duel of the Group A opening winners. Diogo Jota from Liverpool FC gave the guests the lead with a double header (11th / 36th). Aleksandar Mitrovic made the connection immediately after the break (46th), the Frankfurt Bundesliga professional Filip Kostic (60th) saved the attacking Serbs one point. The referee refused to acknowledge a goal from Ronaldo in the hectic final seconds.

Also in Group A, Luxembourg celebrated a late win over Ireland. Gerson Rodrigues scored in the 85th minute to make the outsider 1-0. Meanwhile, Vice World Champions Croatia rehabilitated three days after the 0-1 in Slovenia. In the 1-0 (1-0) against Cyprus in Rijeka, Mario Pasalic scored in the 40th minute.

The World Cup third Belgium did not get beyond a 1: 1 (0: 0) in Group E in the Czech Republic. The world number one is tied behind the Czechs in second place. Belgium fell behind with a goal from Lukas Provod (50th), Romelu Lukaku made it 1-1 (61st) on a pass from Kevin De Bruyne.

Fabian Frei: “I expected more from us” 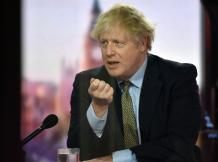 Probably by mid-February: Great Britain is going into lockdown

What can the Prime Minister and Chancellor agree on?