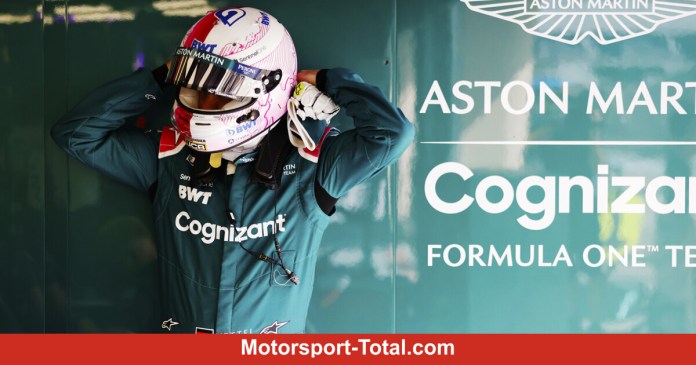 Berger: That is Sebastian Vettel’s problem

Today we start with an analysis of Sebastian Vettel, delivered by DTM boss and ex-Formula 1 driver Gerhard Berger. The Austrian was a guest on the podcast “In the Fast Lane” and spoke about the current situation of the Heppenheimer. He believes the four-time world champion is starting to stumble under pressure.

Vettel had a miserable start to the season with his new Aston Martin team. After being relegated to the bottom of the field, he also made a mistake in the race and collided with Esteban Ocon. “Sebastian is a four-time world champion, so he’s an exceptional driver, no question about it,” said Berger.

But: “He never reacted well under pressure.” That was already the case with Red Bull and Ferrari. “When you watch him, he doesn’t seem liberated. He’s not relaxed enough. He’s trying to prove something that is not possible at the moment because the car or his own shape are not good enough.”

Our first big topic today was Sebastian Vettel’s current form. The German was also the subject of the “On The Marbles” podcast with David Coulthard and Mark Webber. Both know the four-time world champion, especially from his Red Bull days. What do you trust him after the difficult Ferrari years in green?

“I just don’t see how he’s going to find that mojo again. I think he’s an asset to the team in terms of experience. He’s a safe bet when it comes to bringing the car home, but I think.” if you lose that little bit of speed … “, Coulthard is skeptical.

He believes that Vettel is primarily part of the new marketing strategy at Aston Martin. Beating a four-time world champion is also beneficial for Lance Stroll. Because that is a justification for saying that the Canadian is a future world champion, says the Scot. “If he does what Charles does with Seb [Leclerc] with Seb, I just don’t see him like that [Vettel] can end the season. “

Tuition: All helmets at a glance

At the first race of the season after the winter break you are usually not familiar with all of the drivers’ new helmet designs, which is why Formula 1 created this nice overview. Now there are no more excuses 😉

Only two Japanese rookies were better

By the way, Yuki Tsunoda was the first Japanese rookie in Formula 1 to score points on his debut. However, three of his compatriots have already finished ninth in the first race in the past – only there were no points for them back then.

Marko: Tsunoda “soon to be a new Formula 1 star”

Back to Yuki Tsunoda one more time. The Japanese was not only able to pick up from his team boss Franz Tost Lob after his Formula 1 debut, but also from Red Bull motorsport consultant Helmut Marko. Even before the first race weekend, the Styrian raved about the Japanese’s qualities (“a real pleasure” and “sensational”), and he was not disappointed.

“Soon he will be a new star in Formula 1”, believes Marko in an interview with ‘RaceFans.net’. He not only has the necessary talent and mental strength, but also the right height. “The engineers love it.” Will Tsunoda actually become the first world champion from Japan? “Definitely.”

Verstappen: That’s why overtaking is so difficult

Max Verstappen was understandably disappointed after the race in the desert. The Grand Prix showed how important the position on the track is. Because overtaking is incredibly difficult in the current Formula 1, says the Red Bull driver. “I was able to catch up with Lewis quite comfortably, but as soon as I got close I had no grip,” said the Dutchman. That was probably also due to the windy conditions in the slower corners.

Even though Verstappen’s tires were fresher than the British’s, he couldn’t make out the difference. “Then I was a little way out at Turn 4 and had to give up the place. After that, it was impossible to try again.” After that he was too far away, also because he had to intercept severe oversteer in turn 13 and lost time as a result.

Video: The Big Analysis of the Bahrain GP!

In our first “Last Night” video of the new season, Christian Nimmervoll and Stefan Ehlen analyze the events of the Bahrain Grand Prix. Among other things, the two explain why Max Verstappen had to give the position back to Lewis Hamilton on lap 53 or what actually went wrong with Sebastian Vettel. It’s worth taking a look!

If you don’t want to miss any of our Formula 1 videos, you should subscribe to our Formel1.de YouTube channel immediately!

McLaren team boss Andreas Seidl can be much more satisfied after the season opener, both drivers made it into the points. Lando Norris finished fourth, Daniel Ricciardo seventh on his debut. “I’m very happy with what the team showed this weekend,” beamed the German. The hard work over the winter has paid off.

“The distance to Lewis [im Ziel] amounted to around 45 seconds. That is an encouraging sign in a race in which these guys gave full throttle up front, “said Seidl. In fact, Norris was 46.5 seconds behind winner Lewis Hamilton at the finish, just nine seconds short of the podium.

Latifi declares retirement shortly before the end of the race

Nicholas Latifi had to give up the race just before the checkered flag due to a technical problem. Already on the rounds to the grid he heard something strange. “We hoped it would work itself out in the race.” But that wasn’t the case and the Canadian struggled 80 percent of the corners when stepping on the gas.

“If the engine’s power fluctuates a lot, it makes it worse if you have to watch the tires.” The longer the race went on, the more and more Latifi suffered from the difficulties. He reports that he was missing around 18 km / h on the straights.

The Formula 1 debut of the two Haas drivers Mick Schumacher and Nikita Masepin was less rosy. The German spun in the race, as did the Russian. Although Schumacher was able to finish the race practically out of competition, Masepin’s Grand Prix was already over after three corners. “He’s simply overwhelmed with Formula 1,” says Marc Surer in an exclusive interview.

Williams test driver Jack Aitken, who unexpectedly made his Formula 1 debut in Bahrain last year because George Russell was needed at Mercedes, mocked on Twitter after the race: “That’s how I feel about the 60 laps that I do I managed to do much better before my spin. ” Who has the damage …

“Yuki is an extraordinary talent,” says AlphaTauri team boss Franz Tost. The Tyrolean was a guest at ‘AvD Motor & Sport Magazin’ and spoke about the performance of his newcomer. Tsunoda is not only “determined” and “focused”, but also has the “necessary self-confidence” and is “mentally strong”.

The rookie’s greatest strength, however, is being able to estimate the speed very well, explains Tost – “especially in fast corners. He has an uncanny feeling for the car at the beginning of the corner towards the apex.” He is also particularly strong on the brakes. That was also shown by the overtaking maneuvers in Bahrain, which Tost “really liked”.

Postscript: “I think Yuki will be very successful in Formula 1.” And: “He’ll be world champion, I’m sure of that.”

That was Tsunoda’s debut!

In this video, Formula 1 has summarized Tsunoda’s debut again. Above all, the overtaking maneuver against Fernando Alonso touched the Japanese emotionally, as he told us later. In the last lap he also grabbed Lance Stroll – strong!

Back to the season opener on Sunday. Three rookies had to prove themselves in Bahrain – besides Mick Schumacher, Yuki Tsunoda and Nikita Masepin also celebrated their Formula 1 debut. While the Haas newbies did not go as they wanted, the Japanese in the AlphaTauri was able to demonstrate in his first race.

Formula 1 sports director Ross Brawn is just as enthusiastic in his column today as the Red Bull leadership: “He’s the best rookie in Formula 1 for years.” Because he was not only able to convince in the premier class, he has already marched through the junior categories at high speed. “His promotion seems to have been a brilliant move from Red Bull.”

Today Ferrari is testing with Pirelli in Bahrain, namely the new 18-inch wheels to be introduced in the coming season. The Scuderia previously completed three test days in Jerez in February.

Tomorrow and the day after tomorrow, the new tires will be tested in Bahrain, when Alpine will take over from Ferrari. Pirelli has a total of 30 test days this season to try out the 18-inch wheels. All teams except Williams are available for this.

McLaren confirmed in a statement today that Daniel Ricciardo’s underbody was damaged in the race on Sunday – from contact with Pierre Gasly at the start of the Grand Prix. The Australian himself already suspected damage to his MCL35M and said: “If my underbody has been damaged, I’ll sleep better tonight.”

Because the longer the race lasted, the slower the Australian got. Team boss Andreas Seidl explained on Tuesday: “The extent of the damage has cost a considerable amount of downforce.”

Formula 1 has just announced that a total of 8,150 corona tests were carried out on the racetrack in Bahrain between Monday (March 22nd) and Sunday (March 28th). Twelve people tested positive for the virus.

Team boss: No repetition of the Ferrari years?

Many observers see a continuation of the Ferrari years coming after Vettel’s poor performance in Bahrain. Aston Martin team boss Otmar Szafnauer firmly rejects this: “The car he drives now is completely different from the one he drove before,” he emphasizes.

It is still very early, so you shouldn’t jump to conclusions now. “He couldn’t drive a lot in the winter test and seemed to have all the problems. Still, I’m confident we can get Seb there, [wo er stehen sollte]. “That just needs a little more time.

Frankfurt am Main: There is a risk of traffic jams on...