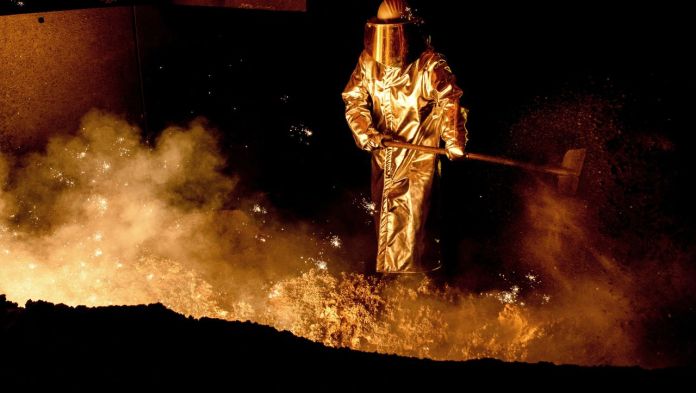 No percentage wage increase, but fixed amounts: In the collective bargaining for the north-west German steel industry, there is an agreement on a new collective agreement. On Saturday morning, the employer and IG Metall agreed one-off payments for around 70,000 employees in the industry in North Rhine-Westphalia, Lower Saxony and Bremen.
The employees receive a corona bonus of 500 euros. In addition, the employer and the union agreed on a further one-off payment of 600 euros, which will initially be transferred in partial amounts and paid out every year from 2023 onwards. These recurring payments can be converted into free time to safeguard employment. The collective agreement runs until May 31, 2022.
The union had entered negotiations with the demand for a collective wage increase of four percent. In companies with a poor order situation, it should also be possible to use the money for measures to safeguard jobs.
The North Rhine-Westphalian district manager of IG Metall, Knut Giesler, called the agreement “a responsible and fair compromise”. The wages and salaries rose permanently due to the new collective agreement. It is also positive that the trainees and the lower salary groups benefit disproportionately from this negotiation result.
The chairman of the Steel Employers’ Association, Heinz Jörg Fuhrmann, said that the collective agreement serves to maintain the company’s financial ability to act in the face of the existence-threatening loss of substance in the corona crisis.

Who will receive the vaccine first in Germany

Raid on doctors in Hamburg: certificates issued for mask refusers