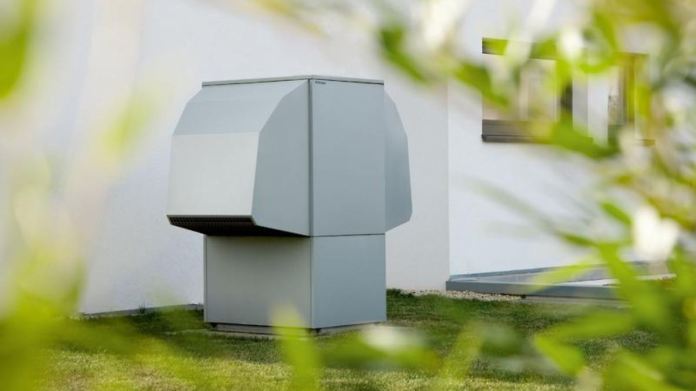 Heat pumps are the heating standard in private new buildings. But they are often not efficient enough for old buildings – so far. A new generation of heat pumps has now been presented at the ISH trade fair.
It takes a lot of patience to develop better heating systems. The small development steps that have now been presented at the world’s leading trade fair for heating, the IHS digital in Frankfurt, are tough. Because the hyped heat pump is now becoming more efficient in old buildings – and always quieter, which could prevent a neighborhood dispute in narrow new building areas.

In recent years, the heat pump has turned from a niche product into a trend product among heating systems in private buildings – also with support in the form of good funding. According to the Federal Association of the German Heating Industry (BDH), a total of 120,000 devices were sold in Germany in 2020, an increase of 40 percent.

The sticking point was the high flow temperatures

But the heat pump is “the most frequently installed system in new buildings, but not in old buildings,” says Tim Geßler from the “SBZ” magazine. Because heat pumps have so far worked particularly efficiently in systems with a low flow temperature – that is the temperature that the heating water needs when it flows into the pipes and radiators.

For example, according to Geßler, underfloor heating combined with the heat pump only requires around 40 degrees Celsius – this is why it is also referred to as a low-temperature heating system. Convectors and radiators, which can often be found in old buildings even after renovations, on the other hand, need much higher temperatures.

“Up to now, heat pumps could also be used in old buildings. But more electricity had to be used in order to achieve the higher flow temperatures,” explains Geßler. It is true that the heat pump generates the majority of its energy for free – that is its great advantage. But this also always requires electricity to run the compressor. In old buildings with systems that require higher flow temperatures, this power requirement increases – and with it the operating costs.

But now the industry has developed a new generation of devices to efficiently operate heat pumps in existing buildings with higher heat requirements, says BDH General Manager Andreas Lücke. A number of such heat pumps were presented at the ISH trade fair.

For example, the Compress 7800i LW, a brine-to-water heat pump from Bosch, can achieve a flow temperature of up to 71 degrees. This means that it can also be operated with radiators in the house, explains the manufacturer. Viessmann also mentions flow temperatures of up to 70 degrees for its Vitocal 250-A / 250-AH / 252-A models. Underfloor heating is not required, existing radiators can continue to be used.

The Logatherm WLW286 A from the Bosch brand Buderus and the new Geoblock devices from Weishaupt manage a flow temperature of up to 65 degrees. The Altherma 3 H MT heat pump, which the manufacturer Daikin offers as a solution for houses built from the 1990s and “for the simple exchange of gas and oil heating devices or other heating systems”, also achieves this value.

The manufacturers are also working on an annoying feature of some of the air-water heat pumps: their humming noises, which can become a nuisance for the neighborhood in densely built-up areas.

If you stand three meters from the Daikins Altherma 3 H MT, you only hear 35 dB (A) sound, according to the provider – that’s roughly equivalent to a quiet radio. Within Viessmann’s Vitocal series, 30 dB (A) are possible at a distance of four meters with free installation in low-noise operation – the manufacturer speaks of “whisper-quiet”.

Geßler analyzes that the new air-water heat pumps have indeed become “significantly quieter”. The heating expert also emphasizes the possibility of an even quieter night setting of the devices. But then the devices are also less powerful. Geßler also emphasizes that noise pollution is “of course still a matter of individual circumstances”. Because technology is one thing, the other is educating homeowners.

This means that if the unit is set up, for example, directly on the terrace or even on the property line, where a neighbor’s window is within reach, the operating noise will of course still be heard. “But here, too, something has happened. The manufacturers have informed the tradespeople and they are increasingly aware of the need for good advice on site,” says Geßler.

His conclusion: “The manufacturers have achieved a lot in the last two years. The new generation of heat pumps with new refrigerants is more powerful and efficient.” The installation options for the old building are particularly important with a view to the envisaged energy transition: “The renovation is the big lever that we need.”

The energy gained meets a refrigerant that evaporates at a low temperature. The steam is compressed in a compressor and is therefore very warm. This heat is finally transferred to the heating circuit. Thus, a heat pump works on the reverse principle of a refrigerator, which directs the heat from the inside to the outside.

Fire at the “Rotes Rathaus” underground station – dozens of rescuers...

Salzburg Airport with massive break-ins in the 2020 financial year