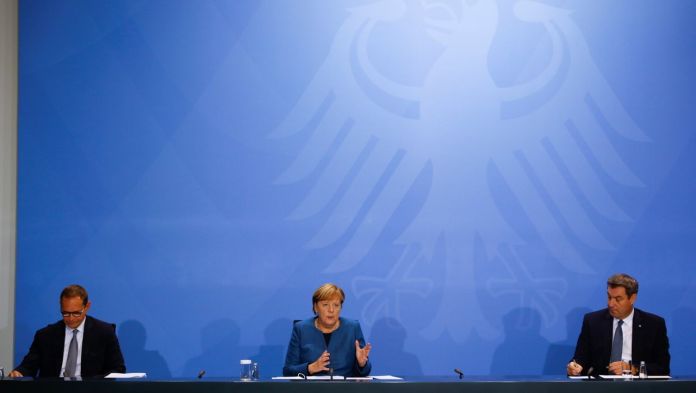 Less than a week after the last federal-state meeting on corona policy, a heated debate has broken out about the right course in the pandemic. While Baden-Württemberg’s Prime Minister Winfried Kretschmann (Greens) brought a new Prime Minister’s Conference with the Chancellery into play at short notice, Bavaria’s State Chief Markus Söder (CSU) insisted on a consistent implementation of the emergency brake.
On Saturday evening, Kretschmann had promised further talks between the federal and state governments about a hard lockdown at the beginning of the week, but not necessarily on a large scale. “We also have to discuss this with other countries in advance, with the Federal Chancellery. We see, the numbers are literally racing up, ”said Kretschmann.
During the talks on Monday and Tuesday you have to “come to terms”. The SPD health expert Karl Lauterbach had also called for a quick new corona summit.
Markus Söder rejected such plans on Sunday. “It does not need constant new discussions, but the consistent implementation of the emergency brake,” emphasized the CSU boss in the “Augsburger Allgemeine”. In the case of incidences over 100, this also included exit restrictions. Health Minister Jens Spahn (CDU) also suggested a “real shutdown” over Easter yesterday.
Chancellery chief Helge Braun (CDU) spoke out in favor of a tougher approach. “If the number of infections rises rapidly parallel to the vaccination, the risk increases that the next virus mutation will become immune to the vaccine,” he told the “Bild am Sonntag”. In the event of such a mutation, “we would be left empty-handed again,” Braun continues. Then new vaccines would be needed. Among other things, he called for regional exit restrictions.

Meanwhile, the state of Berlin wants to strike a new path in the corona pandemic in order to get out of the cycle of opening and closing despite the increasing number of infections. Therefore, on the one hand, cautious easing in trade and culture, for example, will remain, but will be supplemented by new and stricter rules, especially with regard to testing.

The so-called emergency brake does not come into effect in the way that the federal and state governments had decided. The Saarland had recently announced an opening.

Baden-Württemberg relaxes the rules for private get-togethers in areas with high numbers of infections. Meetings of two households with up to five people are allowed from this Monday on, even in areas with more than 100 new infections per 100,000 inhabitants per week. Children don’t count.

In Brandenburg and Mecklenburg-Western Pomerania, the corona measures have meanwhile been partially tightened. There, in regions with a seven-day incidence of more than 100, nocturnal exit restrictions are possible in the future.

Merkel explains, the economy is pushing

The seven-day incidence in Germany has been increasing for days. Most recently, the value of new corona infections per 100,000 inhabitants within a week, according to the Robert Koch Institute (RKI), was 129.7, as shown by figures from Sunday morning. The health authorities reported 17,176 cases to the RKI within one day, the day before there were 20,472 new corona infections. The last 90 deaths were recorded within 24 hours.

Exactly one week ago, 13,733 new infections and 99 deaths were reported within one day. The number of cases reported by the RKI is usually lower on Sundays, among other things because fewer tests are carried out on the weekend.

Chancellor Angela Merkel (CDU) asked questions on television that evening. According to ARD, the program »Anne Will« will be about what the admission of errors in connection with additional »Easter holidays« means for the further crisis management of the federal and state governments.

Another topic is the question of where Germany is currently in the fight against the coronavirus and how the third wave of infections should be broken.

Pressure for a new, strict shutdown is coming from the economy. Gesamtmetall President Stefan Wolf told “Bild am Sonntag” that it must finally stop that every municipality can go its own separate way. “I would prefer if we could go into a tough lockdown nationwide for another ten days and then be able to open it everywhere, instead of having no clear structures for months.”

Wolf clearly criticized the Prime Minister’s group: “For months, their decisions have completely ignored the needs and wishes of people and companies.”

Which connection costs the most?

Exit rules: pitfalls for the holidays

Berlin: “For the purpose of odor nuisance …”: Curious detail discovered...