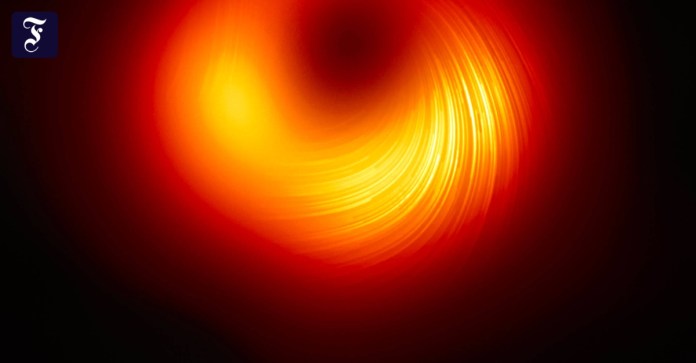 IIt was 2019 the A picture from science: the “first photo” of a black hole. The orange-red ring on which the shadow of the central mass colossus of the elliptical galaxy M87, 55 million light-years away, was darkly outlined, had nothing at all to do with a photo in the conventional sense, of course. It was recorded by an earth-spanning network of telescopes at six different locations, the “Event Horizon Telescope” (EHT), the data of which had to be put together after years of analysis to create what would eventually grace the front pages of daily newspapers around the world. In Europe, the Spanish IRAM 30-meter telescope contributed to the observations.

This image had helped to further refine our understanding of black holes. At that time, however, it was already clear that the evaluated information was still incomplete. The data collected in 2017 also contained other valuable but unpublished indications of the conditions in the immediate vicinity of the black hole.

The international EHT research group, including scientists from the Max Planck Institute for Radio Astronomy in Bonn, has now provided this information in two new publications (here and here) in the “Astrophysical Journal”. It is the so-called polarization data that provide information about the direction of oscillation of the light received. In order to understand what this is all about, one has to realize that electromagnetic radiation can be imagined as a wave that oscillates perpendicular to its direction of propagation. If this direction of oscillation is constant, one speaks of linearly polarized light.

This effect is known from everyday life, for example, from some sunglasses that only allow light of a certain polarization direction to pass through. If you look through such glasses, the polarization effect increases the contrast between light that is reflected in different ways on surfaces and which has been polarized in different ways by the reflection. One can clearly imagine polarization filters as a grid of parallel rods that only lets through light that oscillates in the corresponding direction.

The concept of polarization is not that easy to explain. However, the observation and analysis of this vibration data are much more demanding than is the case for data in which light is registered regardless of the direction of vibration. It was therefore to be expected that the publication of the polarization data of the black hole in M87 would take a little longer. In addition, the interpretation of these observations requires physics that are comparatively complex to model – which ultimately allow conclusions to be drawn from the direction of oscillation of the light on the orientation and strength of the magnetic fields and the properties of the matter in the vicinity of the black hole.

Knowing the magnetic field is, in turn, of key importance in order to understand how the matter behaves at the edge of the black hole. It is there in the form of a plasma, i.e. it is electrically charged and must therefore follow the magnetic field in its movement according to the laws of electrodynamics. There are still many open questions to be answered here, because black holes send out gigantic flows of matter, so-called jets, perpendicular to the disk of matter flowing into the black hole.

XCOM: Chimera Squad: References to the console version are increasing

No bottlenecks in oxygen supply – salzburg.ORF.at

Hearing in the US: GameStop actors deny manipulation

Berlin libraries are closing due to Corona