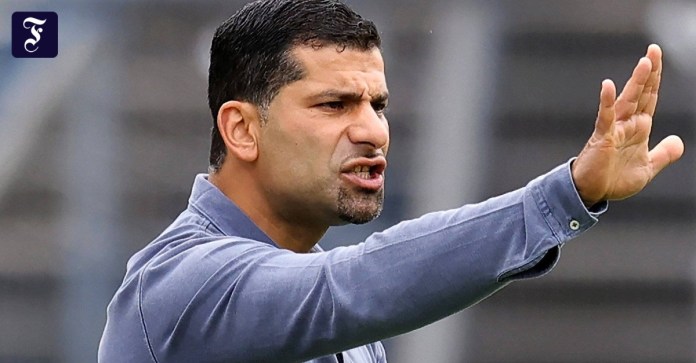 SDifficult mission, courageous coach – on his first day at work in what is currently the biggest problem in German professional football, Dimitrios Grammozis looked surprisingly relaxed. Unimpressed by the poor score of the team, the recent staff quake and the great media coverage, the new head coach of FC Schalke 04 was demonstratively confident this Wednesday. The fact that he was previously a coaching candidate for the Revierklub several times, but always got a basket and was outpaced by competitors, cannot diminish his anticipation: “It is important that you stick with it when you are convinced of the bride. It can take three or four times. “

The temptation to try your luck at a big club displaces the injured pride. “I know what I’m getting myself into. The good thing is that I am connected to my home country and know what makes Schalke actually tick, ”said the Wuppertal-born successor to Christian Gross at his introduction. Peter Knäbel is also in good spirits that the sporting marriage between Grammozis and the Revierklub will last longer than with its predecessors: “He’s the right man, at the right time in the right place,” commented the 54- Year olds.

After an unprecedented wear and tear of four coaches in one season, the 143-time Bundesliga professional is hoping for more continuity. Even in the event of relegation, the club’s management wants to hold onto Grammozis and has therefore provided him with a contract up to and including June 30, 2022. According to reports, his contract should be extended to summer 2023 in the event of relegation and immediate resurgence.

About $ 20 million for McKennie

The 42-year-old’s first game is tough. Because the basement duel on Friday (8.30 p.m. in the FAZ live ticker for the Bundesliga and DAZN) with the penultimate from Mainz is probably the last chance for a turnaround for the Revierklub, which is nine points behind the relegation place eleven game days before the end of the season . Grammozis doesn’t just want to arouse new passion among his professionals for the game against Mainz: “Schalke is not a Tiki-Taka club. Hard work and solidarity are paramount here. We don’t want to be accused of not having tried everything. “

It fits with the strategy of the club management that Grammozis, as a long-time junior coach of VfL Bochum and later head coach of the second division team Darmstadt 98, has experience in the junior and professional area. Not only the high fluctuation in management, which is likely in the case of relegation, but also the debt level of around 240 million euros, forces an increased development of talent. “With a view to the coming months and years, the Knappenschmiede will play a very central role,” explained Knäbel. Not least because of this, the former professional Naldo and Onur Cinel are switching from the professional coaching staff to the youth division.

But even after the coach question has been clarified, the clean-up work on Schalke continues after the great quake with the separation of Gross, sports director Schneider, team manager Sascha Riether, fitness coach Werner Leuthard and co-trainer Rainer Widmayer.

The next urgent task is the search for a new sports director, which, according to the head of the supervisory board, Jens Buchta, causes a lot of effort: “This is eminently difficult because our financial situation and the sporting situation influence this decision.” becomes a permanent solution. Knäbel did not want to comment on these speculations: “What I know is that I have overall responsibility for sport until further notice.”

In line with the hopeful restart of Grammozis, there was good news from Italy. Accordingly, Juventus Turin has decided to sign the former Schalke Weston McKennie, who has only been loaned out so far. That flushes almost 20 million euros plus possible bonuses into the tight Schalke coffers. “The fact that Juventus Turin prefers the transfer and that Weston McKennie is already permanently committed gives us greater planning security with a view to the new season,” commented Christina Rühl-Hamers, Head of Finance and Human Resources.

Falken hosts are unlucky with Corona – Zurich loves their pub,...

Bayer Leverkusen before the top game against FC Bayern: The most...

Scalpers continue to drive prices up on Ebay