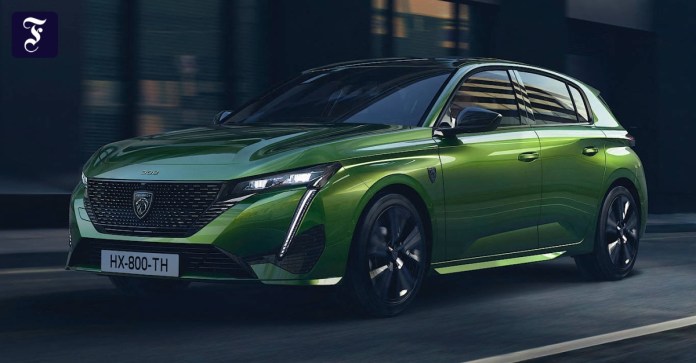 BBefore a new Boeing leaves the factory in Seattle, dogs are sent onto the plane. They belong to a special unit founded in 2001 and track down explosives with their fine noses. This animal unit is called K-9, and it has a black and white coat of arms. The new Peugeot logo looks astonishingly similar, except that the French are not about dogs, but lions. It is emblazoned more majestically than ever on the radiator grille of the new 308, the compact model that traditionally competes in its own country against the Renault Mégane and internationally against the VW Golf. 7 million cars sold are both a solid base and an obligation. He comes to Germany in October.

The insignia of the night crouch behind the coat of arms, while radar and sensors for powering the assistance systems look ahead from their cover. The 308 is packed with aids for driving and comfortable ingredients such as bonded structural parts, noise-insulating glass, steering wheel heating, LED headlights, ambient light, cup holders, inductive charging cradle and USB-C sockets. With a length of 4.36 meters, it offers a little more space, especially in the second row, because the wheelbase has been stretched.

The entire silhouette is dynamic. The new model, initially presented statically, is a touch flatter, the windshield is more inclined than before and is further back, at the end there is a long spoiler, and the characteristic daytime running lights shine at the front. Mathematically, 412 to 1323 liters fit into the trunk.

Inside, Peugeot continues on its way with a cockpit set upstairs, the displays of which are futuristic or very futuristic. Virtual buttons and a freshly designed control element around the gear selector switch are signs of a young age. In terms of engine, the fairly manageable range includes gasoline, diesel and plug-in hybrids as well as manual six-speed gearboxes and an automatic with eight stages. The 1.2 liter petrol engine is available with 110 or 130 hp. The 1.5 liter diesel delivers 130 hp.

The hybrid, which can be recharged at the socket in around seven hours, has 180 or 225 system horsepower, and 12.4 kWh are available for the electrical route. This allows you to sneak up on a competition that the courageous lion cub will take a close look at. We assume the entry-level tariff to be between 23,000 and 24,000 euros.

Instead of 255 euros for free today: You should definitely not...

Corona measures: “We will have to tackle it much more sharply”...