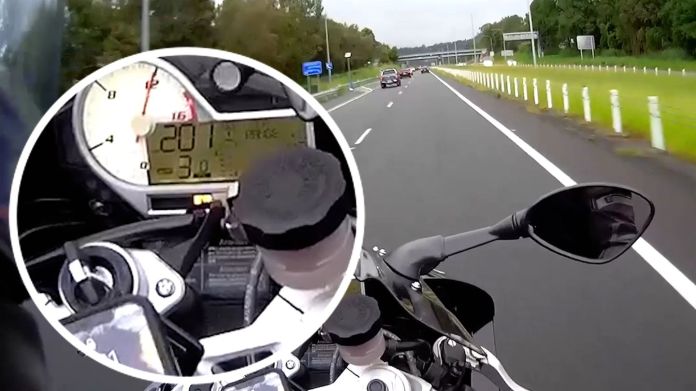 See in the video: “A miracle that he is still alive” – ​​motorcyclist does dangerous wheelie at 200 km / h.This motorcyclist has to pay the equivalent of a fine of more than 11,000 euros.
Sunshine Coast traffic police officers in the Australian state of Queensland intercepted the 27-year-old in the city of Maroochydore on March 23.
The officers noticed him because he was driving at high speed on his BMW motorcycle despite the wet road.
When officers checked the man’s helmet camera, they found that the man had committed a total of 43 road traffic offenses.
In one case, he allegedly performed a wheelie at 109 kilometers per hour in a 60 zone from a red light.
He is said to have filmed another wheelie at 201 kilometers per hour while overtaking cars on his rear wheel in a 100 zone.
But that was not the end of the 27-year-old’s list of crimes. The day after his arrest, officers searched the man’s residence in Pacific Paradise. There they confiscated the motorcycle. But they also found a grow room with eight full-grown cannabis plants.
Meanwhile, the suspect has been charged with 10 dangerous traffic offenses and the manufacture and possession of illegal drugs, as well as possession of paraphernalia for drug manufacture. His trial begins on May 10th.
According to the police, the fines for the traffic offenses alone amount to the equivalent of 11,323 euros.
Queensland Police Department Inspector Shane Panaho said, “There are already twenty-one families whose loved ones have not come home after a traffic accident this year.”
Driver safety is everyone’s responsibility, but it starts with them.

How SARS-CoV-2 gets into the brain – olfactory cells are a...

CureVac Stock Spotlight: Who Owns the Most Vaccine Developer’s Stock? ...