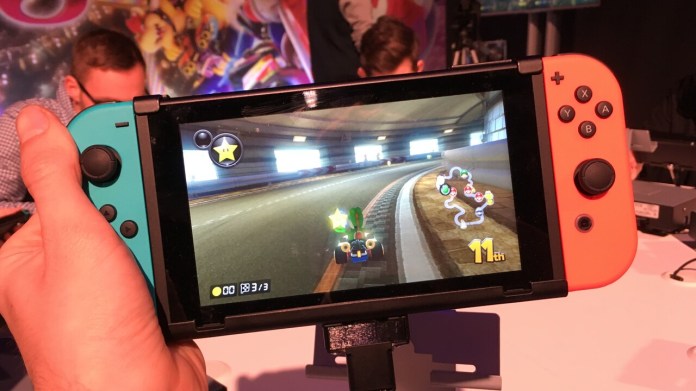 The rumors about a new Nintendo Switch with upgraded hardware do not stop and should be a current report from Bloomberg become a reality at Christmas time. A new chip from Nvidia is said to support the AI ​​upsampling DLSS in order to improve the resolution of future games up to 4K on the television.

As part of the announcement of the last quarterly figures, Nintendo had a speculated “Switch Pro” rejected and declared that it would not bring a new model of the game console onto the market in the next twelve months. The latest rumors are once again in contrast to the official statement from Nintendo, which did not want to comment on the current report.

Once again, a switch that has been improved in terms of hardware is rumored to have an OLED display from Samsung. According to earlier rumors, an increase in size from 6.2 to 7 inches is planned in the course of the panel change, which would increase the distance to the Switch Lite (test) by 5.5 inches. The Switch Lite is designed exclusively as a handheld and also dispenses with the removable Joy-Cons.

A higher resolution is not in the room for the new screen, instead, the new switch should be able to output up to 4K instead of the previous Full HD resolution in stationary mode. The computing power required for this is to be provided, among other things, by a new system-on-a-chip with a stronger CPU and more memory from Nvidia, which is currently delivering the Tegra X1 to Nintendo. The Tegra X1 has already been slightly upgraded from the T210 to T214 variant for the 2019 switch. It is not yet known whether Nvidia will continue to drill out the Tegra X1 for Nintendo or switch to the Tegra X2. Another technology could help and at the same time raise further questions.

The right SoC is actually missing for DLSS

Accordingly, Nintendo should support the AI ​​upsampling DLSS (Deep Learning Super Sampling) (test) developed by Nvidia, which could explain the speculated output in 4K on the dock with reduced computing effort for the hardware. There is only one catch: So far, Nvidia has only supported the technology on Turing and Ampere graphics cards with tensor cores. Turing is not yet available in Tegra SoCs, and with Ampere only the Orin chip from the automotive segment, which is completely oversized for the switch, would come into question. Tensor cores have been around since the Volta architecture, which the Xavier SoCs use for the GPU. However, there are no consumer graphics cards with DLSS support from Volta. Accordingly, Nvidia would have to release the DLSS technology for older architectures or develop a completely new SoC with DLSS support, which does not seem realistic for a switch upgrade.

AI upscaling, however, not as DLSS for games, but without a distinctive brand name for videos, is available for the Tegra X1 in the current shield (hands-on). So there are still a lot of unanswered questions, despite new rumors.

When pricing a suspected of Bloomberg Quoted analyst that Nvidia could call up to 100 US dollars more and thus up to 400 US dollars for the “Switch Pro”, although 350 US dollars are more attractive to position in the market. The console has been priced at $ 300 since its launch in 2017.

Two young women rescued from the winter via ferrata on Untersberg...

The price of the PlayStation 5 was already decided before Covid-19,...

Stuttgart trendsetters say what’s coming in 2021: will the pandemic drive...