Rafael Nadal (left) and Roger Federer hug each other. But their friendship is not as close as this picture after the Match for Africa 2020 suggests.

They have been facing each other on the tennis courts for 17 years: one of the biggest rivalries in sport has developed between Roger Federer and Rafael Nadal since the Spaniard’s two-set victory in Miami. And friendship too. Which is expressed, among other things, in the legendary PR video for the first edition of the “Match for Africa” 2010, where the two hunched over and laughed like only good friends can do.

It is therefore somewhat surprising that Nadal now makes it clear that this friendship is not really intimate. “We are very good companions and over time our relationship has improved,” said the 34-year-old in an interview with Sergio Rial, President of Santander Bank Brazil. “But we’re not close friends.”

The Mallorcan reveals what he would never say to Federer, for example. “I wouldn’t tell him that my knee hurts before a game against him.”

«Can always call us»

But the two are still in regular contact. “We can always call each other and talk about anything,” says Nadal and adds: “I just spoke to him today!”

Nadal, who had to cancel several tournaments after the Australian Open due to back problems, also speaks in an interview about his health problems. He plans to play the entire sand season from Monte Carlo to the full. “I want to be competitive and well prepared,” says Nadal. «This is the most important time of the year for me. I work very hard for it. “

In Miami, where Federer and Nadal first met in 2004, both are currently missing. The hope for further epic duels between the two 20-time Grand Slam winners is certainly there. Nadal is currently leading 24:16 in the direct comparison. (sme)

Brady got tax money and bought a yacht

Regulation now there: These rules apply at Christmas

Leverkusen loses fourth in Frankfurt – Union for the time being

The most important questions before starting the vaccination: Are hotels, restaurants... 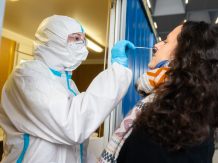