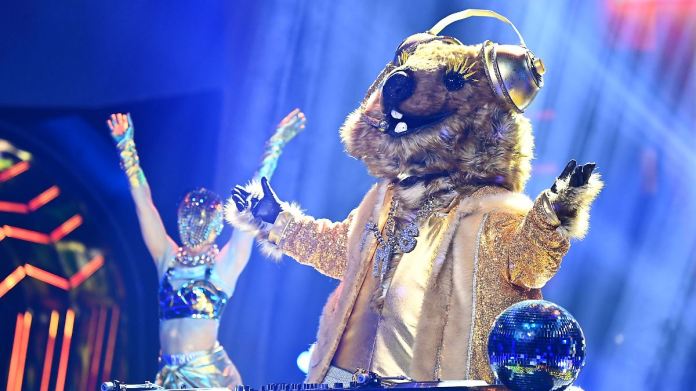 Nobody expected him
The quokka in “Masked Singer” is exposed

In the third edition of the current “Masked Singer” season, tips on who is under the costumes fly around the room. Even when the quokka appears, the guessing team is on the line. When it finally reveals itself, there is great astonishment.
Katrin Müller-Hohenstein and Franziska van Almsick have already had to unmask themselves. In the third episode of the new “The Masked Singer” season, the remaining eight participants in their costumes fought for another week of anonymity. For the quokka and the flamingo, things got tight in the end.

Ruth Moschner and Rea Garvey were ready for another round of guesswork. They were supported by moderator Steven Gätjen. Were they able to find out about the celebrities together?

Is the leopard a big star?

The monstronaut made the start. After the performance of the AC / DC classic “TNT”, the guessing team guessed comedian Teddy Teclebrhan, actor Wilson Gonzalez Ochsenknecht or one of the magician brothers Andreas and Christian Ehrlich. The performance of the leopard followed. Who was the best of Lady Gaga’s “I’ll Never Love Again”? At the advice desk there was agreement: It can only be Leona Lewis or Sarah Connor – a big star in any case.

Significantly more names were used after the appearance of the quokka. When it brought U2’s hit “One” to the stage, Moschner, Garvey and Gätjen wanted to have heard the cabaret artists Hans Werner Olm and Torsten Sträter as well as DJ Sven Väth and actor Ralf Moeller. They suspected a man under the flamingo costume again this week. After Kylie Minogue’s “All The Lovers”, the three guessed the singers Pietro Lombardi, Nino de Angelo and Bill Kaulitz.

The flamingo also had to tremble

The turtle opened the second four-way battle of the evening. When she hit KALEO’s “Way Down We Go”, Moschner, Garvey and Gätjen pondered names like Howard Carpendale, Jürgen Drews or Thomas Anders. The subsequent performance of the dinosaur also called three different names on the scene. Daft Punk’s “Get Lucky” could therefore have tried Álvaro Soler, Sasha or Adel Tawil.

The chick’s soft beeping followed the strong dinosaur voice. But who had interpreted Meghan Trainor’s “All About That Bass” so lovely? The rate jury rolled over tips: Was it Palina Rojinski or influencer Caro Daur? Actress Karoline Herfurth or Luna Schweiger? The bull also made Moschner, Garvey and Gätjen at the end of the show at a loss with his performance of the football classic “You’ll Never Walk Alone”. You bet on Tote-Hosen frontman Campino or Alexander Marcus, BossHoss singer Sascha Vollmer or Patrick “Coach” Esume.

A short time later there was certainty about at least one identity. After the quokka and the flamingo were the last ones left on stage, the decision was made. The Quokka had to give up its camouflage – and actor Henning Baum came out. Nobody had expected “the last bull” that evening.

Charge e-cars in 10 minutes: the robot-operated battery exchange station is...

Major conjunction: How Jupiter and Saturn approach each other | ...

Retail in the corona pandemic: This is how the Esslingen shops...

Are Wamangituka and Gonzalez simply irreplaceable at VfB Stuttgart?

Fight of disaffection – miscellaneous from Germany & the world

Exclusive Google Apps: How to Get the Apps

Google Photos should finally be properly integrated into the Chromebook operating...