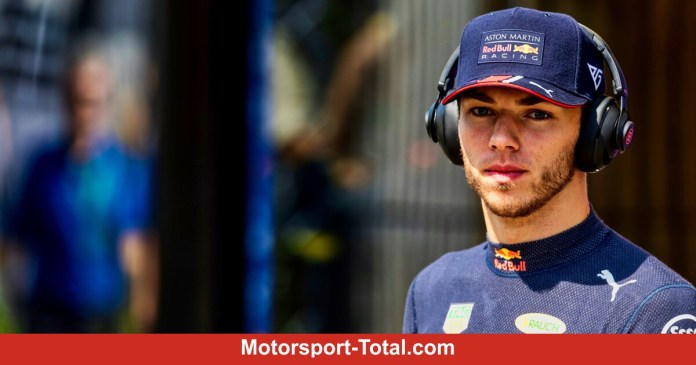 (Motorsport-Total.com) – 2019 was probably the most difficult year in Pierre Gasly’s life. Back then, after only twelve races, the French lost his Red Bull cockpit and a little later also his good friend Anthoine Hubert in a fatal accident. In a guest post for ‘The Players’ Tribune’ he gives insights into his soul life at that time.

Pierre Gasly missed the support of Red Bull in 2019

“I was fulfilling a dream. I was so excited. I wish I could say that it was exactly what I expected, what I had hoped for. But it wasn’t,” he says of his time at Red Bull back. The then 23-year-old was promoted from Toro Rosso to the Bulls A-Team after just over a season.

As the successor to Daniel Ricciardo who switched to Renault, he had big footsteps to fill in there. But everything went wrong right from the winter tests. “From the moment I made the first mistake in the car, I had the feeling that people were slowly turning away from me,” recalls Gasly.

“Got my ass off every day!”

He had a serious accident during the test drives in Barcelona. According to his own statement, his season never really picked up speed afterwards. He says: “My first two races at Red Bull were difficult and the media ate me up. Everything I said in the press was twisted into an excuse for my form.”

Gasly started the season with an eleventh and an eighth place, while team-mate Max Verstappen finished third and fourth respectively. At this stage he would have liked public support from the team. But that did not happen according to his statement. “Nobody really stood up for me,” said Gasly.

Franz Tost on differences of opinion with Helmut Marko, Mick Schumacher’s chances in Formula 1 and the preparation of AlphaTauri More Formula 1 videos

“The car wasn’t perfect and I did my best to improve and learn week after week,” he said, adding: “It was a difficult time at Red Bull because I didn’t feel like it get the same support and treatment as others before me. “

He couldn’t accept that. “I worked my ass off every day trying to get results for the team. But I didn’t get the tools I needed to be successful. I tried to offer solutions. But either they didn’t listen to me or it took weeks for something to change, “says Gasly.

Throwing out on vacation

The Frenchman makes it clear: “I’m not the type to play something about the media because I’m really grateful to Red Bull for this opportunity and for everything they have done for me in my career.” Nevertheless, he now wants to tell the “truth” from his point of view. Because after only twelve races his “dream” ended again.

The Hungarian Grand Prix, the last race before the summer break, should be his last for the bulls. At that time, however, he had no idea that. In the World Cup he was behind Verstappen with 63: 181 points. While the Dutchman had already taken five podiums and even two wins, Gasly never stood on the podium.

Photo gallery: Formula 1 2021: The new AlphaTauri AT02 in pictures

“Before I went on vacation, I called our team boss Christian Horner,” he remembers and explains: “I just wanted to ask him what I can do on the race weekends to improve myself and whether he likes my side Garage a little closer. Christian said he would do anything he can. “

He himself was ready to work hard to improve in the second half of the season. “But when I was on vacation in Spain, Helmut Marko called me and said: ‘We’ll send you back to Toro Rosso in exchange with Alex Albon,'” recalls Gasly, for whom a world collapsed.

Marko assured him at the time: “That doesn’t mean that your story is over with us. But with everything that’s going on in the media, we think it’s the best.” But Gasly admits: “I was sad. I can’t lie. I was completely down. I want to be world champion.”

“Who knows when I’ll be in such a good car again? It’s very, very hard to take a step back in this sport,” he explains. A message from Anthoine Hubert then rebuilt it. His friend wrote to him that he should prove to everyone at Toro Rosso that he deserved a place on a top team.

Team boss Tost explains: This is new about the AlphaTauri

Franz Tost, Team Principal of Scuderia AlphaTauri, in an exclusive interview about the new AT02. (Video length: 9:49 minutes)

In the first race after the summer break in Spa, Hubert’s death was another stroke of fate. In terms of sport, Gasly was actually able to rehabilitate himself later. In the penultimate race of the season in Brazil, he took a sensational second place. In 2020 he even celebrated his first Formula 1 victory for AlphaTauri in Monza.

Nevertheless, there has not yet been a way back to Red Bull for him. For the 2021 season, the team decided to sign Sergio Perez as Max Verstappen’s new teammate.

Jason O’Leary is the new coach of the SCL Tigers

Lufthansa boss Spohr calls for freedom of travel in Europe

Coronavirus: China seals off two megacities from the outside world