Up until the early summer of 2020, everything had looked very good for the now eleven-time World Cup medalist. “It was one time until June, I was perfectly prepared,” said Kraft. “But then I fought with my back all summer. My girlfriend sometimes had to put my socks on. ”In December the problems became acute again. “I have to say thank you that it has developed like this again,” said the now three-time individual world champion.

Kraft had just taken third place in the current World Cup season, from the 2013/14 season onwards there had always been more. A concentrated preparation from an extra training day in Zakopane in mid-February, increasing physical well-being and an aha experience in the second jump of the mixed competition on the normal hill brought about the turnaround. “That was sure to be the turning point,” Kraft stated on Friday.

Stefan Kraft is crowned world champion on the large hill at the Nordic World Ski Championships in Oberstdorf. For the 27-year-old, it is the third single gold medal after his double success in 2017. No Austrian has ever achieved this before him.

With a remarkable jump he expressed his joy on the top step. “I had to laugh the whole time. This time it doesn’t result in tears as it often does for me, ”said the Salzburg native. “I am overjoyed that it worked out, that it was once again a competition as one imagines it.”

First he jumped far, then up: World Champion Stefan Kraft in Oberstdorf

ÖSV head coach Andreas Widhölzl naturally also cheered. “I’m very proud, it’s a cool thing. He stayed really cool. It has become apparent in the last few days that he is getting stronger and stronger. If he smells the fuse, he won’t let go of it. After the whole mess we had this winter, this is a really cool end, ”said the Tyrolean.

Tenth place in the WM normal hill individual was not bad for the two-time overall World Cup winner, but neither was it the claim of a caliber like Kraft. “I only saw that my ski had too little pressure,” he recalled. “Tailwind and small hill, that was just a little too sharp. Now the big one, a bit of an upswing, suddenly it works sensationally. I jumped a little more aggressively. ”

The feeling of being in the lead before the decisive jump was almost unfamiliar again. Kraft had also led in the last ÖSV victory after the first jump, that was on February 28, 2020 in Lahti. “I thought it was a long time ago that I was the last to stand up. Otherwise I didn’t think about that much. I’ve looked at my points to be done. I knew I had to do just that and attack fully. “

Half the battle: With his first jump, Kraft took the lead at halftime and never gave it up

He then took the heart in hand, then it worked out exactly. “When I saw it crossed the green line, I screamed out everything that was inside.” Thanks to the family. “She always believed in me. They all drove around with me, wanted things to get better. ”His systemic coach Patrick Murnig also played a major role. “I have learned to listen to my body, and I am sure it was a great help.”

With three gold medals on the credit side, Austria’s athletes will start their last day of competition on Saturday, at the end of which there will be the next and also one big chance for a medal in the men’s team competition. World champion Kraft, Daniel Huber (8th), Jan Hörl (10th) and Philipp Aschenwald (11th) collected the most points in the large hill individual as a team on Friday, and on Saturday (5 p.m., live ORF1) it really works the team result.

ÖSV head coach Andreas Widhölzl has set up for the competition in the reverse order of the individual result, so Kraft jumps last. Aschenwald opens in front of Hörl and Huber. In this order it is about the 19th red-white-red team world championship medal in men’s ski jumping, although it has always worked since Oberstdorf 2005. The last of nine titles so far was eight years ago, in 2013 in Val di Fiemme none of the current squad was in the gold quartet.

Kraft sees himself and his colleagues as one of six teams in the medal race: “Germany, Norway, Slovenia, Poland, Japan maybe and we.” In contrast to the individual competition, the weather will be nice, with a tailwind to be expected. “But we did a really great competition today, all four of us, that will surely inspire you.”

Trial in Berlin: Rapper Bushido: Only wanted to pay to protect...

The Berlinale not only suffers from Corona – BZ Berlin 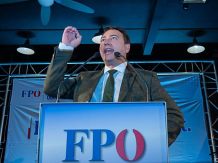 After Haimbuchner also President of the State Parliament in the hospital...

Elon Musk: SpaceX Starship landed for the first time – and...