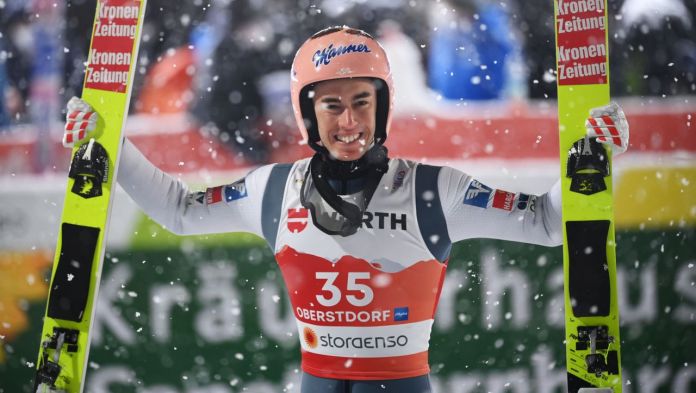 There was something sinister about the way the ski jumpers appeared out of nowhere at the take-off table and flew down on that Friday evening. After days of spring, winter had briefly arrived in Oberstdorf, snowfall and fog enveloped the diving platform. Despite all the adversities, there was a fair competition at the Schattenbergschanze – with a world champion who on the one hand belongs to the group of the world’s best jumpers, but who now surprised: Stefan Kraft.
The 27-year-old Austrian won ahead of the Norwegians Robert Johansson and Karl Geiger. Kraft has had a complicated winter. It already started during the preparation in the summer when Kraft had to struggle with acute back problems and could not complete the planned workload. That would have been all the more important because Kraft needed time to get used to the new wedges in the ski boots. For most jumpers, the wedges that are supposed to make landing safer had to be reduced in size. With Kraft it went in the other direction, he had to deal with enlarged wedges due to the new regulations.
Shortly after the start of the season, the corona virus was rampant in the Austrian team. “I had to spend a week at home on the couch and continued to lose substance,” said Kraft after winning the gold medal. In December he celebrated his comeback at the Ski Flying World Championships in Planica – and immediately had to deal with the next setback. The back pain was back, “I couldn’t even put my socks on properly,” said Kraft.

Kraft was the most consistent jumper in the past six years. In the overall World Cup, he was never worse than sixth, winning the big crystal ball twice. The 1.70 meter tall athlete drew his strength from this experience. In good physical condition, strength is one of the victorious jumpers. After the average Four Hills Tournament with eighth place in the overall ranking, he directed his goal towards the World Championship. When he narrowly missed the podium in Zakopane in mid-February, “I knew that I could jump for medals at the World Cup”.

Because Oberstdorf is one of his favorite hills. Kraft celebrated his first World Cup victory here in 2014 and laid the foundation for the tour’s success. He remembered exactly this jumping during the course of the day: “Conditions were like my first victory here.” Snow, wind, fog, the veteran was not impressed by that.

However, Kraft also benefited from the burdens of its biggest competitors. Halvor Granerud, by far the best jumper this winter, fell out after a corona infection. Ryoyu Kobayashi fell shortly after landing and missed the second round. Kamil Stoch is deep in shape. Markus Eisenbichler made a mistake in the first and fell in the run-out of the second jump. The field of favorites had cleared and Kraft showed a very good competition with jumps on 132.5 and 134 meters.

Kraft is jumping for his fourth world title

Now the World Cup is drawing to a close, but Kraft has another chance to win his fourth title and his twelfth medal at world championships. In the team, Austria suddenly belongs to the gold candidates after a mixed winter. In the wake of strength, Daniel Huber, Jan Hoerl and Philipp Aschenwald jumped to places eight, ten and eleven. It was the best team performance in the “Oberstdorf snowstorm,” as Kraft realized with a grin behind his red face mask.

But the German Ski Association can also hope for a medal, alongside Norway, Poland, Japan and Slovenia. “Anything is possible,” said Kraft. “You can win or even finish fifth.” However, sunshine is announced for Saturday again.

Serious allegations against Donald Trump: US government is said to have... That is why there are many more corona cases in Germany

How to adopt a cat & take it into your apartment...

Mafia expert warns of danger: ‘Ndrangheta has long been operating in...