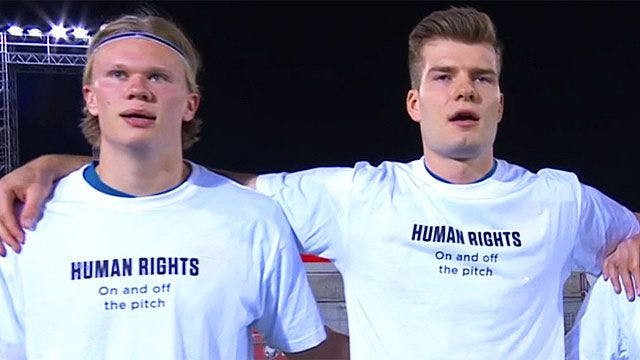 The Norwegian national team is using their first qualifying game for the 2022 World Cup to send a silent message about the human rights situation at World Cup hosts Qatar.

The new national coach Stale Solbakken also wore one of the shirts. “It’s a little bit about what we talked about, that we want to focus on what has been discussed outside of the field,” he told Norwegian broadcaster TV2. “I set a good example.”

Solbakken had already revealed before the game that he and his players had discussed the Qatar issue and agreed on an action. According to Odegaard, the entire team was behind it. Everyone agrees that what happened and is happening in Qatar is not good, the Arsenal FC attacking midfielder said.

The debate about the controversial awarding of the World Cup to Qatar has been going on in Norway for weeks. At the end of February, a number of Norwegian top division clubs called on the national team to boycott the World Cup if they qualify. The Norwegian Football Association is holding a special meeting on June 20 on the question of a World Cup boycott.

The 2022 World Cup was awarded to the wealthy emirate in 2010. The country is repeatedly criticized internationally for the exploitation of guest workers. According to research by the Guardian, more than 6,500 guest workers from five Asian countries have died in the past ten years. Qatar’s government, on the other hand, declares that reforms in recent years have significantly improved the situation of workers. Human rights activists also admit progress, but warn that the reforms are inadequately implemented.

An overview of the World Cup qualifying matches on Wednesday

“Don’t think anyone will get to this level again”

Huawei: China, Canada and the US and the hostage diplomacy case

Song based on the model “We Are the World”: Stuttgart’s musical...

Minute of silence for Covid victims in many European cities –...