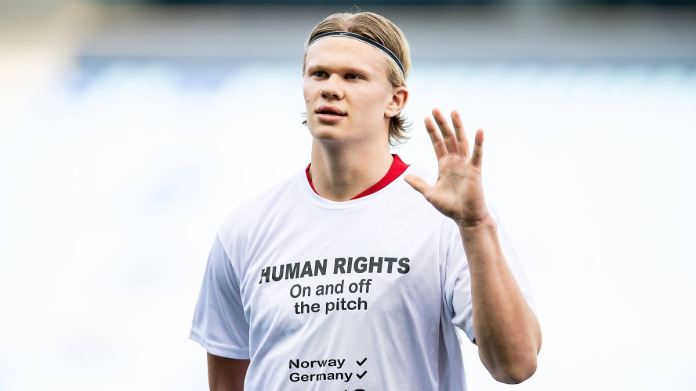 The protest against the human rights situation in Qatar is expanding. After several selections in the World Cup qualification took up the Norwegian initiative, the team around Erling Haaland is now aggressively calling for participation. A first association is already announcing that it will be joining.
The Norwegian national soccer team with top star Erling Haaland has again called for the protection of human rights in Qatar and has found another comrade in the team from the Netherlands. Before the encounter against Turkey, Haaland and Co. wore t-shirts with the inscription “Human rights on and next to the square. Norway, Germany – who next?”.

The answer was given at the same time by the Dutch, who met Latvia in a model test in front of 5,000 spectators in Amsterdam. On the shirts of the Oranje players the slogan “Football Supports Change” was to be read, which is supposed to initiate a campaign of the same name. Denmark is also participating in the campaign, with other teams to follow.

The slogan was also featured on armbands. “We wear these armbands to support freedom, tolerance and inclusion. Football should support change. Also in Qatar. In Qatar we want to become world champions, but not without thinking outside the box,” said a statement from the new one Move. The Dutch association KNVB declared that it had already opposed the World Cup host Qatar in 2010.

There will also be protests in support of the workers in Qatar on Sunday by the Danish national team before the World Cup qualifier against the Republic of Moldova. “The players have decided to point out the need for changes in Qatar,” said the Danish federation.

Both the DFB team and Norway had recently denounced the conditions in the country of the upcoming World Cup host with actions. Before the World Cup qualifier against Iceland (3-0), the German players had each worn a black T-shirt with a white letter – together the message was: HUMAN RIGHTS.

The Norwegian national team sent a similar message on Wednesday. Before the game in Gibraltar (3-0), the players wore white T-shirts with the words: “Human rights – on and off the pitch”.

Qatar has been criticized for years by human rights organizations such as Amnesty International for exploiting guest workers. The English Guardian recently reported that several thousand people have died on stadium construction sites since the World Cup was awarded to the emirate in 2010.

For Valentine’s Day: Leni Klum shows her boyfriend on Instagram for...

Qatar ends conflict with Saudi Arabia and other neighboring countries

Coronavirus in Germany: the decisions at a glance – politics Health – Berlin – E-patient files to start with practices in...

Corona demo in Frankfurt: “Think outside the box 69” expects rejection Exhibitions – Berlin – Parzinger: Constructing the Humboldt Forum is not...