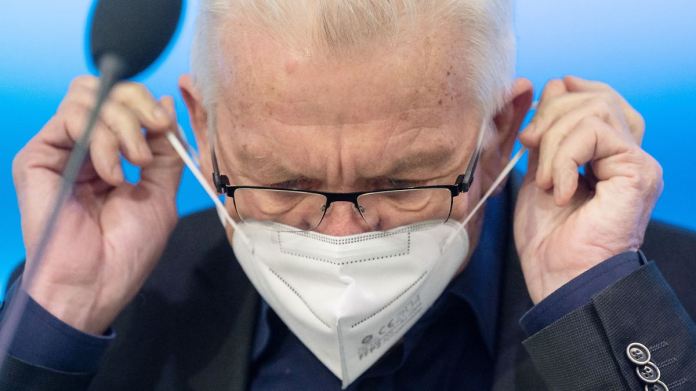 
Update
“Numbers are literally racing up”
Lockdown calls are getting louder

Health Minister Spahn says that social life may have to be shut down sharply. Baden-Württemberg and other countries will be talking about whether a hard lockdown will come as early as Monday. Prime Minister Kretschmann shows incomprehension for the Saarland’s plans.
Just a few days after the last federal-state round, the mood seems to be turning. The calls for a hard lockdown and a new corona summit are getting louder. Baden-Württemberg’s Prime Minister Winfried Kretschmann promised further talks between the federal and state governments about a hard lockdown at the beginning of the week. “First of all we think about such things,” said Kretschmann. “We also have to discuss this with other countries in advance, with the Federal Chancellery. We just see that the numbers are skyrocketing.” During the talks on Monday and Tuesday you have to “come to terms”. The Green did not say whether the next conference of prime ministers with Chancellor Angela Merkel, which is actually only planned for April 12, should be brought forward.

The SPD health expert Karl Lauterbach had also called for a quick new corona summit. The state of Berlin, on the other hand, wants to take a new path in the corona pandemic in order to get out of the cycle of opening and closing despite increasing numbers of infections. Therefore, on the one hand, cautious easing in trade and culture, for example, will remain, but will be supplemented by new and stricter rules, especially with regard to testing. The so-called emergency brake does not come into effect in the way that the federal and state governments had decided. In Mecklenburg-Western Pomerania, however, the corona measures were partially tightened. In regions with a seven-day incidence of more than 100, nocturnal exit restrictions will be possible in the future.

The general metal president Stefan Wolf spoke out clearly in the “Bild am Sonntag” for a hard lockdown. It must finally stop that every municipality can go its own separate way. “I would prefer if we could go into a tough lockdown nationwide for another ten days and then be able to open everywhere, instead of having no clear structures for months.” Wolf clearly criticized the ministerial presidents: “For months, their decisions have completely ignored the needs and wishes of people and companies.”

Braun waiting for the “next virus mutation”

Chancellery chief Helge Braun also spoke out in favor of a tougher approach. “If the number of infections rises rapidly parallel to the vaccination, the risk increases that the next virus mutation will become immune to the vaccine,” he told the “Bild am Sonntag”. In the event of such a mutation, “we would be left empty-handed again,” continues Braun. Then new vaccines would be needed. Among other things, he called for regional exit restrictions.

Regarding Health Minister Jens Spahn’s proposal to shut down social life properly for 10 to 14 days because of the rapidly increasing number of infections, Baden-Württemberg’s Prime Minister Kretschmann said: “From a pandemic point of view, that would be best.” However, one must carefully weigh up whether it makes sense and is feasible to close everything. Most recently, Kretschmann had stated that the British mutant is “spreading so quickly that the number of infections in our country doubles every ten days”. Politicians have to react to this, otherwise the intensive care units will overflow in April.

Kretschmann does not want to allow any more delays with the Corona emergency brake in hotspot regions. “That is strictly enforced. There is no more wasting time,” said the Green head of government. According to reports, there is growing anger in the state government of Baden-Württemberg about urban and rural districts that initially do not apply the emergency brake systematically, although they have exceeded the limit of 100 new infections per 100,000 inhabitants in one week for more than 3 days.

The chief executive of the district assembly, Alexis von Komorowski, said: “The state government has it in hand to eliminate the uncertainties in the implementation of the emergency brake through better regulations in the Corona Ordinance.” Kretschmann emphasized that the emergency brake was “a sharp instrument, especially with us because we do it with exit restrictions”. However, the state government had already announced on Friday that there would be an exception to the contact restrictions over Easter.

Kretschmann was critical of the large-scale easing in the whole of Saarland after Easter: “I don’t quite see what my colleague Tobias Hans is up to,” he said. The decision of the federal and state governments provides that some regions could be declared model areas with openings and a test concept. “But I mean, the whole Saarland was not meant by that. Even if it is small.”

The Saarland wants to loosen the corona measures to a large extent in a model project after Easter: From April 6th – the Tuesday after Easter – cinemas, theaters, fitness studios and outdoor restaurants are to reopen. The prerequisite is a negative rapid test, which must not be older than 24 hours, said Prime Minister Tobias Hans. After Schleswig-Holstein, Saarland recently had the lowest seven-day incidence of all federal states.

Milan in the second leg against United again with Ibrahimovic

Significantly less profit for the Oberbank

Alleged IS sympathizer is silent on allegations

Get a grip on harmful inflation