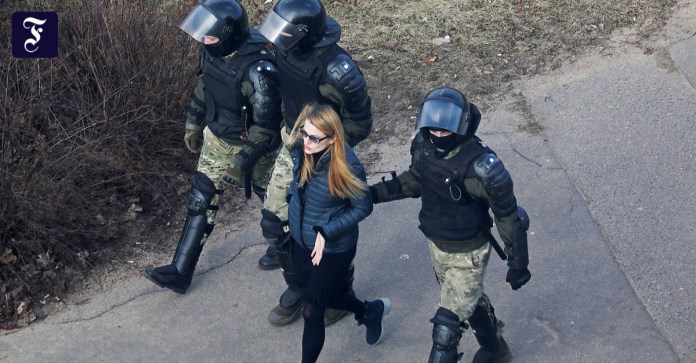 BAccompanied by a large police presence, there have been isolated new protests against the ruler Alexander Lukashenka in Belarus. Security forces were sometimes brutal in arrests on Saturday, as photos and videos on social networks showed. The Wesna Human Rights Center listed the names of more than 100 people arrested by the evening. A video showed how emergency services dressed in black pushed a man to the ground in a meadow and women intervened.

The protests had previously been announced in appeals as the first major action by the opposition this year. In media reports, however, there was initially no mention of crowds in the capital Minsk or other cities. The opposition therefore called for small, decentralized actions. It was said that passers-by were arrested indiscriminately at bus stops. The journalists’ association announced that there were several media representatives among them.

Among those arrested was Deutsche Welle correspondent Nicholas Connolly, who, according to the broadcaster, was temporarily detained for the second time within a week. The journalist was arrested while filming and taken to a police station in Minsk. At the station, officials reportedly checked the papers of the officially accredited journalist. He was also asked to show the video material he had shot. If he does not do this, he will be arrested and his cell phones and equipment confiscated, the officials threatened, according to DW.

“With the intervention of the Embassy of the Federal Republic of Germany in Belarus, the illegal deprivation of liberty of the DW correspondent was ended after around five hours,” the broadcaster said. “During the entire five hours at the police station, no one told me what I was being accused of,” said Connolly. “The regime in Belarus is simply trying to criminalize journalism. Belarusian journalists are exposed to an even greater risk than reporters from international media. “

There had been no major protests over the winter – also for fear of police violence. It was not until Thursday that hundreds of people took to the streets against Lukashenka for the first time on the so-called Day of Freedom. The authorities said there were more than 200 arrests. It was also investigated against motorists who honked on the street out of solidarity with the demonstrators.

After the presidential election on August 9, which was widely considered to be falsified, hundreds of thousands of people demanded Lukashenka’s resignation and new elections. The police brutally attacked demonstrators and arrested tens of thousands. The head of state, criticized as the “last dictator in Europe”, had once again been declared the winner after 26 years in power. The EU no longer recognizes him as president. He relies on Russia as an ally.

The civil rights activist Svetlana Tichanowskaja, who is viewed by the opposition as the true winner of the presidential election, campaigned on Saturday for negotiations with the authoritarian leadership under international mediation. So a “peaceful way out of the crisis in Belarus” could be found, she wrote on Telegram. More than 750,000 people have already voted to start such negotiations on a specially set up online platform.

Corona in Germany: should there be exceptions for vaccinated people?

Australia: Koala triggers a pile-up – and gets behind the wheel

Lola Weippert is the new RTL hope: She’s had trouble with...