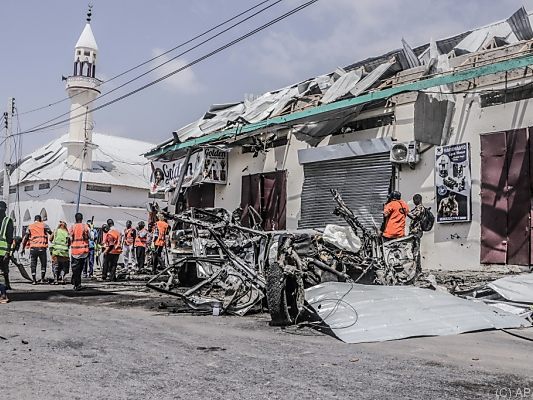 
Another bloody attack by Islamists in Somalia
© APA / AFP

At least 21 people were killed in a suicide attack in the Somali capital, Mogadishu. Almost three dozen other people were injured in the attack, the police said on Friday. “You can hardly imagine how strong the explosion was,” said police officer Ali Hassan of the German press agency.

The number of victims had continued to rise in the evening after one corpse after the other had been recovered from the rubble of the destroyed building. The dead are civilians and the assassin.

The popular restaurant that the attack was directed against has been the target of a suicide attack for the second time. It is mostly frequented by government employees, security personnel and the urban population.

The Sunni terror group Al-Shabaab claimed the attack through its mouthpiece, Radio Andalus. Only a few hours earlier, alleged fighters of the group had attacked a prison in the port city of Bosaso in the semi-autonomous province of Puntland and killed at least eight security guards. A number of prisoners escaped, including suspected terrorists, according to the police. Al-Shabaab also claimed this attack, claiming the attackers released nearly 400 prisoners.

Al-Shabaab has been fighting for supremacy in the country in the Horn of Africa for years. The terrorist group controls large parts of the south and the center and repeatedly carries out attacks on civilians and security forces.

Hessen: Despite the ban on demonstrations: “Unconventional thinkers” in Frankfurt

After a horror crash in Formula 1: Grosjean is allowed to...

Setback for Inter in the title race – Serie A.

New details about the clan shooting in Kreuzberg