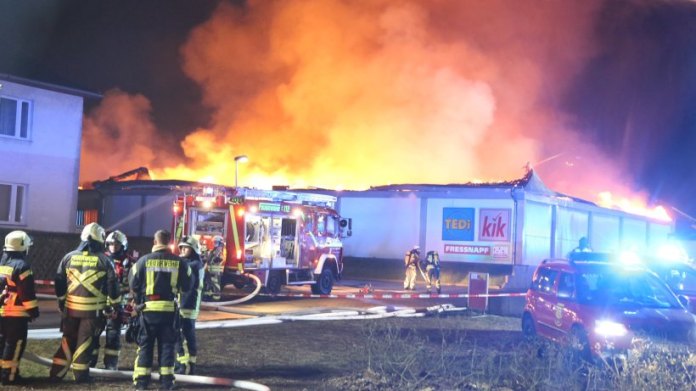 In our blog you will find the latest reports from the police and fire brigade in Berlin and Brandenburg from Saturday, March 27th.

In Hohen Neuendorf (Oberhavel district) three shops caught fire early on Saturday morning around two o’clock. According to a spokeswoman for the Brandenburg Situation Center, these are several shops that are located in a large building in the city center.

The fire brigade was able to extinguish the fires using two turntable ladders. The rework was still going on, as a spokesman for the control center said. No one was injured in the fire. A total of around 100 firefighters from various fire departments were on duty. The cause of the fire and the possible amount of damage is still unclear. A reviewer should be called in later.

A disabled pensioner is on the way to his apartment in Charlottenburg was robbed. The attacker fled with the 69-year-old’s wallet, the police said on Saturday. The fallen senior could not get up on his own after the attack on Friday afternoon. Neighbors discovered him in the house and alerted the police.

According to previous knowledge, the man had returned to his house on Schloßstraße in the afternoon after shopping. He was apparently followed by a man. The stranger then got into the elevator with the 69-year-old and got out with him, it said. Then the strange man suddenly grabbed the pensioner’s jacket pockets. While trying to defend himself, the attacked fell. The thief pulled the wallet from his back pocket and fled. The pensioner was slightly injured.

Policemen got in the night before last Niederschönhausen (Pankow) discovered a woman with a stab wound. The officers had previously heard calls for help from a green area on Kuckhoffstrasse. On site they found a 52-year-old woman who was lying next to a park bench. The drunk woman complained of back pain. She was also hypothermic. The woman did not want to be examined by rescue workers on site. Because of that, she was taken to a hospital. There doctors found a life-threatening stab wound in the back. The woman had to be operated on. The woman previously stated that she was attacked by teenagers with a stun gun. They also stole her handbag. The investigation continues.

In the event of an accident in Spandau two girls were seriously injured on Friday around 2:20 p.m. When the two seven and nine year old girls crossed Seegefelder Strasse with their eight year old brother, the girls were hit by an 81 year old Chrysler driver who was driving towards Zeppelinstrasse. The boy had managed to take a step back to safety, the police said on Saturday. The children suffered serious injuries. Rescue workers took both girls to a hospital.

Unknown people have the NPD party headquarters in Köpenick sprinkled with symbols and sayings. A patrol from property protection discovered the graffiti on the house in Seelenbinderstrasse on Friday morning, as the police announced on Saturday. With white paint, hammer and sickle, a symbol of anarchy, an obscene picture and the saying “Nazis out” were smeared on the wall. When exactly the headquarters was sprayed was initially unclear.

Last night, shortly before two o’clock, a driver was on Mahlsdorfer Strasse in Köpenick Turned left behind a right-hand bend and hit an overhead line mast of the tram head-on. The driver is said to have suffered only minor injuries. A total loss occurred on the car.

Schools in Berlin will be closed until January 17th 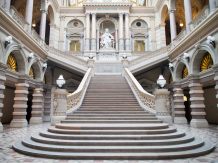 JustizOnline: Access to files online and free of charge – Austria

The Berlin parks are in good hands with BSR