The Oberwart Gunners won the cup against the Gmunden Swans in an exciting basketball cup final on Sunday evening. This is the fifth time in club history that the Oberwarter have won the cup title.

The decision in favor of the Oberwarter was only made in the last quarter. Until then, the game between the Oberwart Gunners and the Gmunden Swans was even, the lead changed several times. Quincy Diggs was decisive in the last section. The Oberwart made 17 points in the fourth quarter alone, securing the Oberwart’s cup victory.

“It’s a great honor for me. We are the Gunners, we never give up and fight till we drop. This year we got the chance to win a title and we took it, ”said Gunners coach Horst Leitner.

The game was exciting until the very end. The Gunners were one point ahead at the break, the Gmunden Swans kept the game open and led after three quarters with 61:55, before Quincy Diggs was in top form in the end and decided the game. Diggs was the best thrower with a total of 30 points and was awarded as MVP, as the “most valuable player” of the Cup final game. Most recently, Oberwart won the cup in 2016, also back then with Quincy Diggs.

Fight against the corona virus: Germany faces a significant slump in...

Homeschooling: “We’ll look at this for another week”

Madrid continues to struggle with the snow masses – schools closed 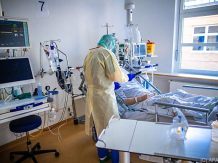 Tour favorite Granerud: the Norwegian with the flow – Vorarlberger Nachrichten