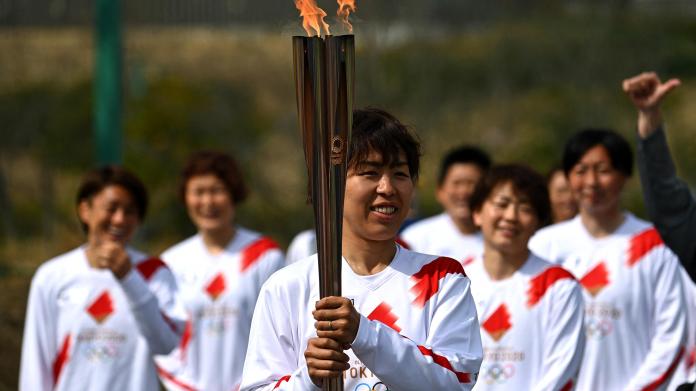 The rose-gold, cherry-blossom-shaped Olympic torch was lit in the J-Village sports complex in Fukushima, which was used as an operations center after the triple disaster in 2011. Ten years after the earthquake, tsunami and nuclear disaster, the start of the torch relay in Fukushima should also remind the world of the progress made in rebuilding the region.

She hopes the Olympic flame will serve as “a ray of light at the end of darkness,” said Hashimoto. Members of the Japanese women’s national soccer team lit the torch on the Olympic flame, which has been in Japan since last year. Azusa Iwashimizu, who won the title with the Japanese team at the 2011 World Cup in Germany, was the first to set off.

The run is also a sign of absolutely wanting to hold the 2020 Olympics as planned. The attitude of the Japanese population towards the games is still very skeptical, two thirds are still against their execution in the summer. However, due to the symbolic power of the torch relay, the International Olympic Committee (IOC) expects a positive effect on the Japanese.

During the torch relay, spectators are only allowed to take part in protective measures and in the vicinity of their place of residence. They are only allowed to clap, but not to cheer the runners on loudly. After the torch left Fukushima, individual spectators wearing masks waved to the runners on the side of the road. The 10,000 torchbearers and the organizers must also comply with infection control measures.

The 9,600-kilometer run through all 47 Japanese prefectures is expected to end after 121 days at the opening ceremony in July at the Tokyo Olympic Stadium. Because of the pandemic, the 2020 Summer Olympics had been postponed for a year. They are now to be held from July 23rd to August 8th. Last week, the organizers decided that the games would have to take place without foreign spectators.

DOSB will not have a German house at the 2020 Olympics

Is there a rush to supermarkets now? That changes at...

Climate protection: Government achieves almost all goals for 2020 – thanks...

VW ID.Buzz: The first meters in the lifestyle electric van

Mikaela Shiffrin is angry and denounces the unfair behavior of the...