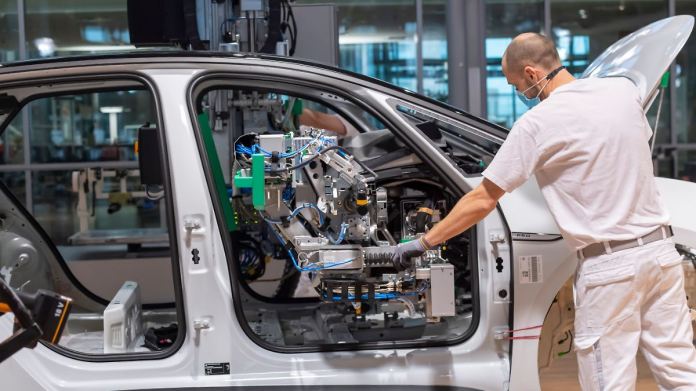 Around the clock, seven days a week
VW would vaccinate its own employees

While frustration is growing in Germany at the slow progress in vaccination, Volkswagen would like to vaccinate its own employees. 140,000 employees could be immunized with it quickly. Because many DAX companies already offer a flu vaccination, they dare to do it.
After the slow start of the vaccination campaign in Germany, the Volkswagen Group offers to vaccinate its own employees. “We can help Germany to vaccinate faster in the next few weeks,” said CEO Herbert Diess of the “Frankfurter Allgemeine Zeitung”. “We are prepared to be able to carry out vaccinations in consultation with the authorities, just as we are already carrying out our own corona tests today. In theory, around the clock, seven days a week,” the VW boss continued.

As soon as the company received the necessary vaccine, it could directly reach around 140,000 people just by vaccinating its own employees, explained Diess. “In Zwickau we will possibly start sooner because there is vaccine because of the particularly critical situation near the Czech border.” Other countries are also making progress. “We are already vaccinating in Spain and Russia,” the VW boss told the newspaper.

The carmaker only presented its test strategy on Thursday: After Easter, all German employees have a corona self-test twice a week. The company in Wolfsburg announced that this will add one component to the previous test strategy. The free quick tests are voluntary and can easily be done by yourself. VW had already set up its own PCR test capacities at its German locations together with the Wolfsburg Clinic in August 2020.

A survey by the online portal Business Insider at the beginning of March revealed a great willingness among Dax companies to help with vaccination. Many companies pointed out that they already offer their employees a flu vaccination and therefore already have the necessary infrastructure and expertise. Similar to VW, however, they attached great importance to wanting to adhere to the order of the risk groups.

Accident on the A31 between Leer and Emden

Statistics of the week: crypto hype – only not in Germany

The solution to the graphics card problem? Nvidia pulls an...

Microsoft Teams: Tool with free video chat for everyone