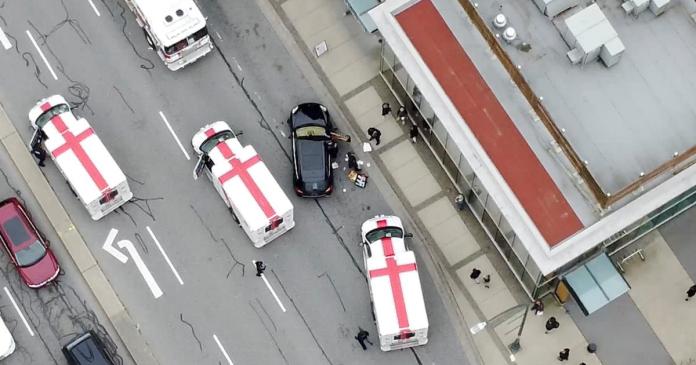 Rescue workers initially spoke of six injured. Frank Chang of the Vancouver Criminal Investigation Department later said one of the injured had died. The identity of the victims has not yet been clarified. “It’s a shock to everyone, including the police themselves,” said Chang.

The Canadian broadcaster CTV showed a video of the attacker’s arrest. He apparently stabbed himself in the leg before collapsing and being arrested by several police officers.

An eyewitness had previously told the broadcaster CBS that the perpetrator had also been taken away in an ambulance after his arrest. The local police had shot him with rubber bullets.

Eyewitness Sheila Dyson told CTV that the attacker apparently did not know his victims, but stabbed people indiscriminately. Andrew Cocking, who lives around 500 meters from the library, told the AFP news agency that he saw rescue workers taking care of the injured. “It was sad, especially since one of the victims was apparently a child,” he said. “It’s sad that these people were in the wrong place at the wrong time.

Former Salzburg coach Huub Stevens, according to the media, back to...

AstraZeneca – Denmark does not want to use vaccine for the...