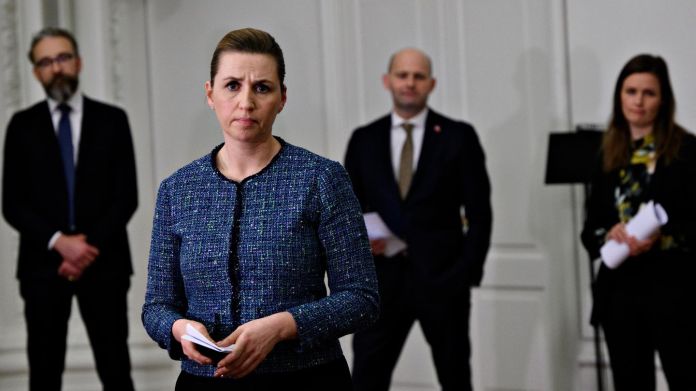 Mette Frederiksen (M), Prime Minister of Denmark, and the chairmen of all parties except one, announce an agreement in Christiansborg Palace for a reopening plan after the corona lockdown
© Philip Davali / Ritzau Scanpix / AP / DPA

Germany closes largely over Easter. In our northern neighbor, however, they have now agreed on a long-term opening plan. From May onwards, cinemas, theaters and restaurants should be allowed to open completely. A corona pass should enable the return to the new normal.

Denmark wants to gradually say goodbye to the current corona measures in the course of the advancing vaccination campaign in the coming weeks – and thus go towards normalcy. The social democratic government and almost all other Danish parliamentary parties agreed on a long-term plan for the gradual opening of many areas on Monday evening. The stated goal: With a few exceptions, public life should be free of restrictions if all risk groups and all people over 50 who wish to have received their first vaccination against Covid-19. However, restrictions should remain in place for certain areas, for example for major events and nightlife.

Gastronomy, theaters and cinemas should open until May

As can be seen from the comprehensive framework agreement, hairdressers and comparable service providers are allowed to reopen nationwide from April 6th – i.e. after Easter. There will also be further relaxation in schools: After the pupils have been back in the classroom for a long time up to the fourth grade, half of the fifth to eighth grades – that means every other week – can now return to face-to-face classes.

Thereafter, the easing should continue at 14-day intervals, for example with the opening of the outdoor areas of restaurants and cafes as well as museums and libraries on April 21. On May 6, the interior areas of the bars as well as theaters and cinemas will be allowed to open again as planned.

As Prime Minister Mette Frederiksen underlined on Tuesday night, a currently developed Corona passport will play a central role in many opening steps. With this one should then be able to prove vaccinations, negative tests and survived infections via app on the smartphone. The parties agree that a corona passport will help control the epidemic, so that large parts of the working and cultural life can be reopened earlier than usual, the agreement said.

The politicians are happy

The agreement was a cause for celebration for Frederiksen and many opposition politicians. The Prime Minister posted a picture of herself with a beer on Facebook and commented on it with the words: “We are about to go home after a good and long day. I am glad that we have a long-term reopening plan for Denmark.”

The party leader of the social liberal radical Venstre, Sofie Carsten Nielsen, published a photo of herself and a post-it on Instagram, on which “It will be everyday life again” – including a heart.

Frederiksen said the government and parties also agree that when everyone over 50 has been vaccinated is an extremely important fixed point. However, the number of infections must be kept low. In the event of local outbreaks, action should be taken quickly and easily at the local level.

Denmark faster than Germany when it comes to vaccinating

According to the current Danish vaccination calendar, all Danes over 50 years of age are said to have been vaccinated by the end of May. According to the chairman of the Danish Conservatives, Søren Pape Poulsen, the agreement means that Denmark will be widely reopened as early as May. Denmark is now looking at an opening of society, while others in Europe are looking at a lockdown, he said, according to the Ritzau news agency.

After peaking in mid-December, the number of new infections in Denmark has fallen significantly. Most recently, in the comparative figures of the EU health authority ECDC, when scaled down to the population, they were roughly at the level of Germany, but the number of Covid-19-related deaths among the Danes is lower than almost anywhere else in Europe. The previous easing of the corona measures have not caused the Danish numbers to skyrocket again so far.

Biontech vaccination: These are the known side effects – knowledge

Higher numbers because of a trip to the demo in the...

“When we open, then schools and daycare centers first” – Germany

ICEHL: Sky will show this game live and exclusively tomorrow: –...